Students will explore the fat content of commonly consumed foods, observe physical properties of lipids (margarine, butter, and vegetable oil) to distinguish between saturated and unsaturated fat, and observe the action of emulsifiers in heterogeneous and homogenous mixtures. Grades 6-8

Student Materials, per group of 4-5 students

Student Materials, per group of 4-5 students

emulsion: a mixture of liquids in which small drops of one liquid are mixed throughout another liquid

heterogeneous mixtures: a solution in which one substance mixes with another but does not dissolve

homogenous mixtures: a solution in which one substance is completely dissolved in another

melting point: the temperature at which a solid changes to a liquid

saturated fat: a type of fat containing a high proportion of fatty acid molecules without double bonds, considered to be less healthy in the diet than unsaturated fat

solidification: the process by which a liquid changes into a solid

unsaturated fat: a type of fat containing a high proportion of fatty acid molecules with at least one double bond; considered to be healthier in the diet than saturated fat 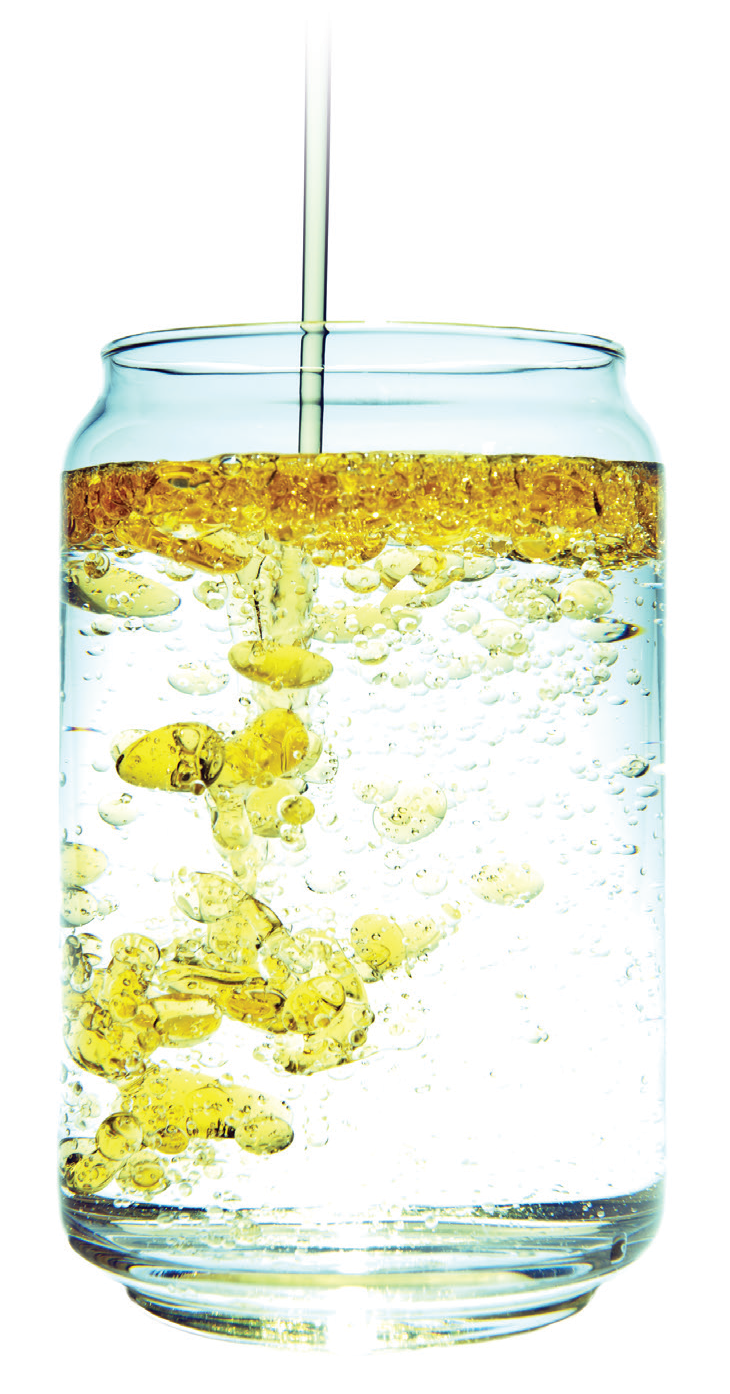 Many students misunderstand chemical and physical changes. Students may think a change of state is chemical, when it is truly physical. You can use the concepts of melting point and solidification to correct these misconceptions in a hands-on, visual manner. Melting point is the point at which a solid fat turns to liquid. It varies from food to food. Solidification, or freezing, is the point at which a liquid turns to a solid. Butter melts at 90-95°F; however, there is no set point for butter to solidify because of its complexity. The exact fat/fatty acid composition is not the same from product to product. Butter will usually solidify around 60-65°F. The melting point of margarine is slightly higher than butter because of the presence of hydrogenated fats. It melts at 94-98 °F. Like butter, there is no set point at which it will solidify; it will usually solidify around 65-70°F. Solid fats have different melting points because they are not pure substances, but rather combinations of mixed triglycerides. Triglycerides are considered the major form of fat and is the storage form of fat in our bodies. Triglycerides are made up of 3 fatty acid chains attached to a glycerol backbone.

Fats in the form of oil also have melting points; however, they are much lower than fats that are solid at room temperature. The melting points of oils vary based on their fat content. For example, the melting point of olive oil is 21°F, but peanut oil is much higher at 28°F. In general, the lower the melting point, the healthier the oil. Based on this information, olive oil would be the better choice. Oils can be converted to solids through a process called hydrogenation, in which all or some (partial hydrogenation) are converted to saturated bonds by the addition of hydrogen. Hydrogenation is a chemical process in which hydrogen atoms are added to the unsaturated carbons, making them saturated. The process occurs only at very high temperatures and results in the production of trans fatty acids (cis converted to trans configuration) among remaining unsaturated bonds in partially hydrogenated oils. Foods higher in hydrogenated fats, or trans fats, have higher melting points. Some factors that influence melting points include the number of carbons in the molecule, the degree of unsaturation, and the molecular configuration (cis versus trans). Fats with longer carbon chains have higher melting points.

The concept of fat and oil polarity can be used to teach students about the cell membrane. A major component of a cell’s membrane is phospholipids. A phospholipid molecule has one end that is hydrophilic (water-loving). The other end is hydrophobic (water-fearing). The cell membrane has two phospholipid layers known as the phospholipid bi-layer. The hydrophilic heads of one layer face outward toward the extracellular environment and, in the other layer, they face inward toward the cytoplasm. This double layer is semi-permeable and only certain types of molecules can diffuse across the membrane. 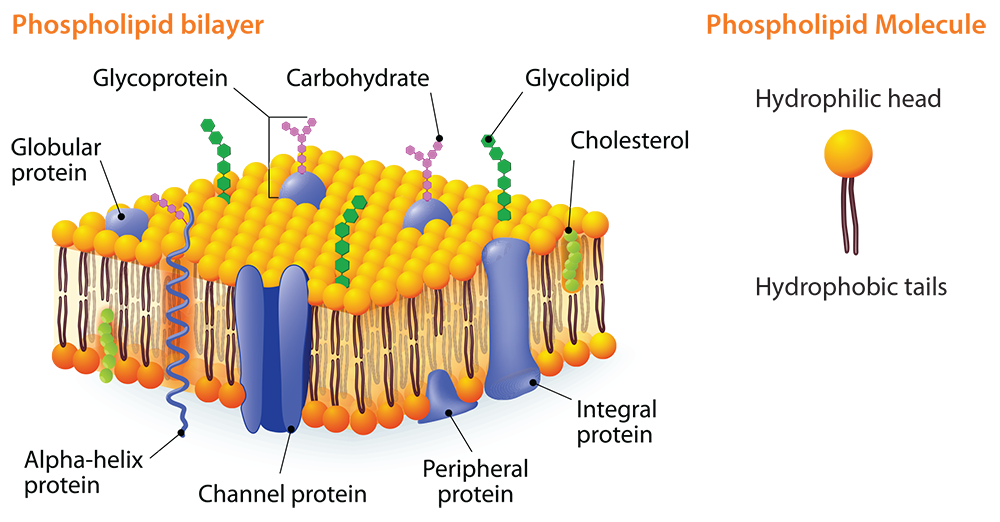 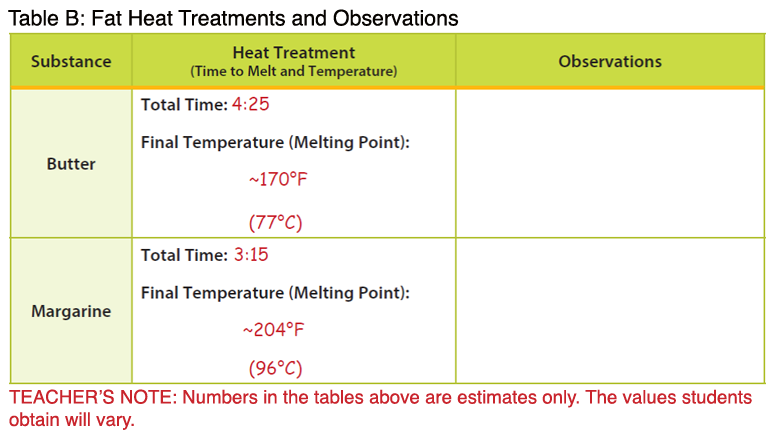 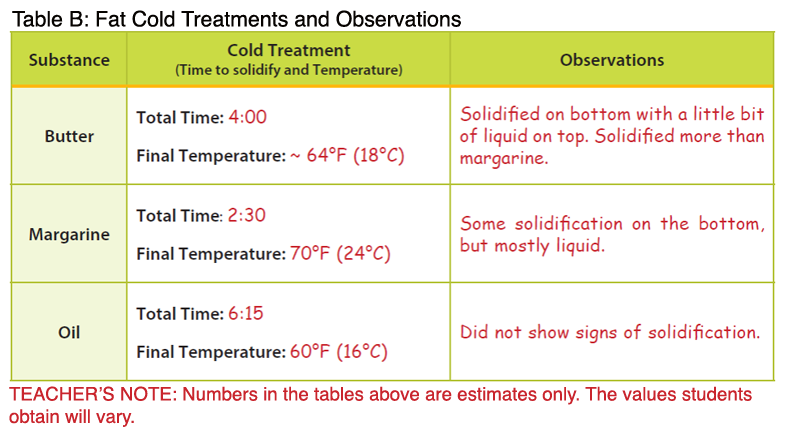