Part B, for entire class

Student Materials, per group of 4-5 students:

acid: a substance that ionizes in water to produce hydrogen ions (H )

base: any substance that in water solution is slippery to the touch, tastes bitter, changes the color of indicators (e.g., turns red litmus paper blue), reacts with acids to form salts, and promotes certain chemical reactions (base catalysis)

chemical change: a change that results in the formation of a new chemical substance through the making or breaking of bonds between atoms

physical change: a change in a substance that does not alter its chemical identity, including changes in shape, physical state, size, or temperature; this type of change is usually reversible

phytochemicals: the broad term for a chemical compound that is naturally produced by plants 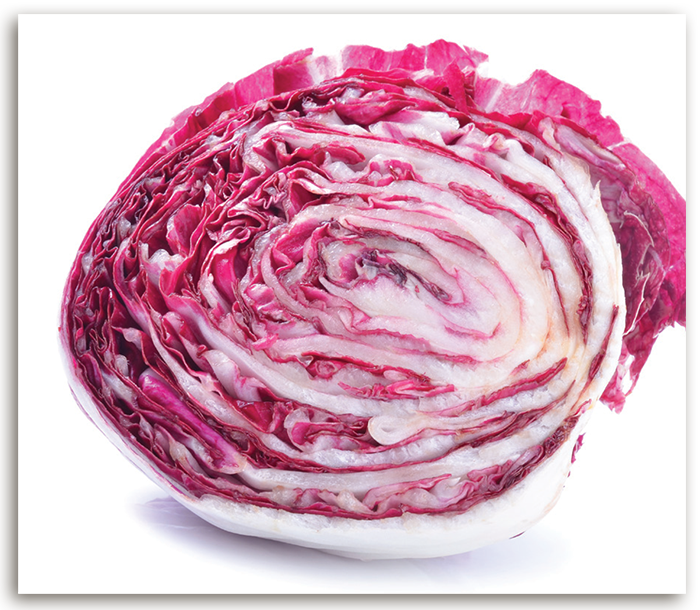 Most Americans do not eat the variety or amount of vegetables they need for healthy living. For this reason, it is important to learn about the science and nutrition of cooking vegetables. In this chapter, students will explore vegetables by learning about pigments, the physical and chemical changes that occur when acids and bases are cooked with vegetables, and the many health benefits associated with eating vegetables.

Acids and bases are determined by the gain or loss of hydrogen ions on the pH scale. The pH scale ranges from 0-14. A pH of 7 is considered neutral, a pH below 7 is an acid, and a pH above 7 is a base. Acids lose hydrogen ions while bases gain hydrogen ions. Cooking in acidic or alkaline solutions can affect the color and structure of a vegetable. Depending on the pigment the vegetable contains, its color may or may not change when cooked in an acidic or basic solution. For example, when a red cabbage is cooked or heated in a liquid, the color of the liquid can indicate pH. If an acid is added the the liquid, the color will turn red; however, if a base is added to the liquid, the color will turn blue.

The color of the vegetable is also a sign of the phytochemical it contains. Phytochemicals may function as antioxidants or anticancer agents. Vegetable pigments provide many benefits for the body because of their phytochemical content. Some red vegetables, such as tomatoes, contain lycopene. Lycopene may reduce the risk of cancer and protect the heart and lungs against diseases. Flavonoids are found in red/purple vegetables and research has found that they may reduce the risk of heart disease, cancer, blood clots, and stroke. Some examples of red/purple vegetables are red cabbage and red bell peppers. Orange vegetables, like carrots and sweet potatoes, contain beta-carotene, which can help your immune system, protect your eyes, skin, and bones, and prevent heart disease. Lutein is found in yellow/green vegetables, such as corn, green beans, spinach, and green bell peppers. Lutein helps keep your eyes and heart healthy.

Green vegetables include broccoli, Brussels sprouts, cabbage, kale, and cauliflower. These green vegetables contain indoles, which may help to protect against cancer. Onions and other white vegetables contain allicin, which also may help to prevent cancer. Some red or yellow vegetables, such as beets, contain betalains. Researchers have found that betalains provide anti-inflammatory and detoxification properties, which helps to prevent disease. Orange vegetables, such as carrots, contain carotenoid pigments. Carotenoids may play a role in improving vision and aiding in the reduction of eye disease. White vegetables, such as onions, contain anthoxanthin pigments. Anthoxanthins may help lower cholesterol and blood pressure. Vegetables, such as asparagus, contain chlorophyll, which are green pigments. Research has shown that chlorophyll can provide cancer-fighting properties. It has been found to treat and prevent certain types of cancer when used as chlorophyllin. Chlorophyll is converted to chlorophyllin when cooked in an alkaline solution resulting in a bright green appearance. Vegetables, such as red cabbage, contain anthocyanins, which include red-purple and blue pigments. Anthocyanins are most notably known for their circulatory benefits. Research has found a relationship between anthocyanins and a reduction in blood pressure and prevention of cardiovascular diseases.

Lab 2: Cooking with Acids and Bases