colloidial dispersions: a substance in which particles are evenly dispersed within a medium (e.g., milk, because milk proteins and fat are dispersed in water)

foam: a frothy mass of tiny bubbles formed from a liquid, such as egg whites

solution: a type of homogeneous mixture in which the particles of one or more substances (the solute) are distributed uniformly throughout another substance (the solvent) 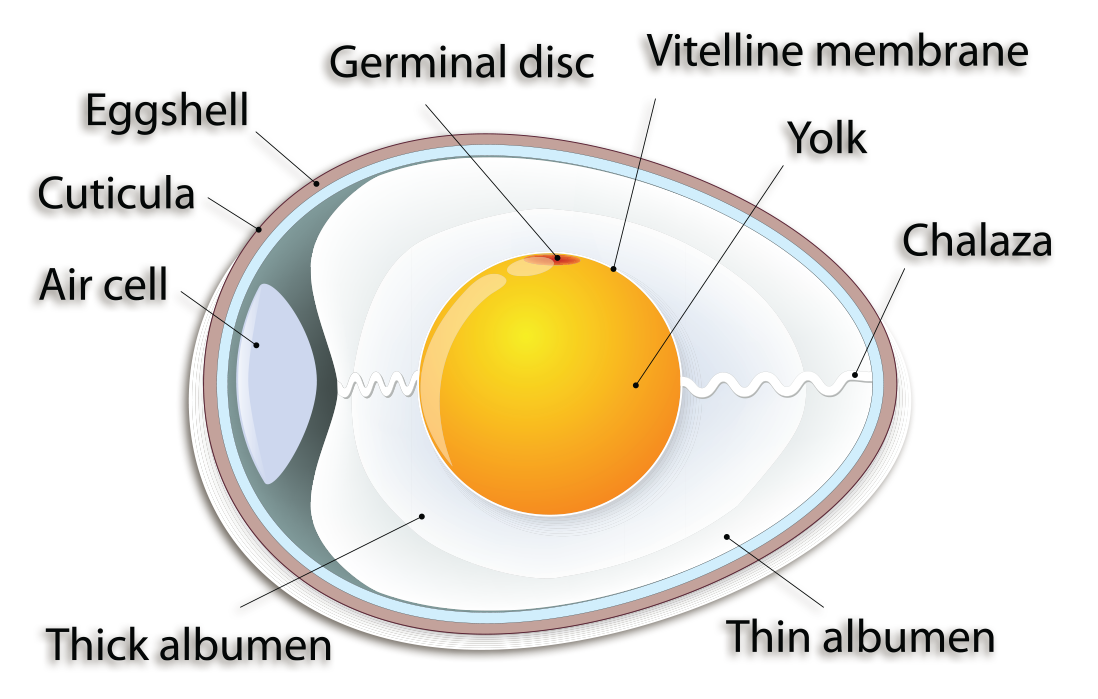 Eggs have an outer shell, a yellow yolk (vitelline), a clear white (albumen), and an air cell. The yolk contains most of the nutrients of the egg. The albumen contains mostly protein. On the side of the egg yolk, there is a small, white disk. This disk is referred to as the germinal disc. The twisted, cord-like structures on opposite sides of the yolk are called the chalazae [kuh-ley-zee]. Their function is to hold the yolk in the center of the egg white. An air cell forms after the egg is laid, as the contents cool and contract.

While chicken eggs are a source of protein in our diets, the egg’s purpose is actually reproduction. In a way, you can think of an egg like a single large cell, even though the yolk and white are molecularly multi-celled. The cell’s nucleus is located in the disc, and it is where cell division occurs in a fertilized egg. Embryonic development occurs here, making the germinal disc the ovum. The yolk and the albumen contain the nutrients for the developing embryo. The air cell is used to provide air to the chick from inside the egg. Keep in mind that the eggs we buy in the grocery store are not fertilized eggs and will never produce a chick.

Non-fertilized eggs are used for a variety of purposes in cooking. The egg’s emulsifying ability make it very useful in food preparation. The lipoproteins found in the yolk help form emulsions because some attract water and others repel water, which will allow oil and water to mix. The figure on the next page provides a visual of how oil and water do not mix naturally. The first picture (A) represents the separation of oil (dark gray) and water (light gray), while the last picture (D) represents a well-mixed solution. Liquids can also be mixed with gas to create a colloidal dispersion where the gas particles are evenly dispersed in the liquid.

When egg whites are beaten, a colloidal dispersion forms foam. The beating motion forces air (gas) into the egg white (liquid). When making foams, the addition of certain substances will change the characteristics of the egg foam. If sugar is added to egg white foam, it will increase beating time; however, a more stable foam will be produced due to a delay in the breakdown of protein. Acids, like cream of tartar, will decrease the pH and make the foam more stable. Salt will decrease stability, but enhance flavor. Fat will inhibit foam formation. Therefore, precautions should be taken to make sure your egg whites have not been contaminated with fat (e.g. oil or egg yolk). Acid and sugar are commonly used to make many egg-based recipes. For example, sugar is added when making meringues.