*These items are included in the Chicken Genetics Matching Cards Kit, which is available for purchase from agclassroomstore.com.

incubation: the act of keeping an organism in conditions favorable for growth and development

poultry: domestic fowl, such as chickens, turkeys, ducks, and geese

Chickens are thought to have come from wild fowl found in Southeast Asia; however, today chickens are raised on farms for their meat and eggs. There are over 113 different breeds, each with different genetic strengths and characteristics. Layer is a term used for a breed of chicken that is a very good egg producer. A laying hen can produce 1 egg per day after she reaches maturity. Broiler is a term used for a breed of chicken that is raised for their meat. Broilers grow quickly and are heavy with a lot of muscle. Some breeds of chickens are not particularly good egg or meat producers, but are raised as pets, as a hobby, or for shows. These are known as ornamental breeds. Raising chickens for eggs, meat, or as a hobby is not new, it has been acknowledged that chickens were raised by people beginning over 4,000 years ago.

Refer to the book, Chicks and Chickens by Gail Gibbons to learn some of the terminology used in the poultry industry. Chicks and Chickens is a children's non-fiction text that describes the different breeds of chickens, their physical traits, and depicts the life cycle of chickens from an embryo to an adult. The text also looks at how their bodies function, how they live, and their domestication by humans. Students will be exposed to how quickly a young chick grows into a rooster or hen for producing the 8 billion chickens consumed in the United States per year and the 250 eggs eaten yearly per person. Each stage of the life cycle is explained and identified with different physical features for all three; the rooster, the hen, and the chick. Descriptive pictures of the chickens' digestive and reproductive systems, drawings of eggs in different stages of development, and many interesting facts make this text a colorful and clear account of the domesticated chicken.

Chickens in the Agricultural Industry

Chickens are essential to the agriculture industry in that Americans consume its meat more than any other meat-producing animal. Whether chickens are raised on large farms inside of chicken houses or small farms as free range chickens their history with humans has been one of a large food source priced less expensive to produce and purchase compared to pork and beef. Chickens ability to produce both meat and eggs make them more diversified than other farm animals.

The leading producing states of meat chickens in the United States include Georgia, Alabama, Arkansas, and North Carolina. In Iowa, Ohio, Indiana and Pennsylvania the largest numbers of chicken eggs are produced. Both broilers and layers are known to be omnivores with a diet consisting of grain, seeds, and insects. Chickens raised on large farms in chicken houses eat a prescribed diet of chicken feed and water. Chicken feed is a mixture of corn, grains, meat, fish, vitamins and minerals.

Life Cycle of the Chicken

The life cycle of a chick begins in an egg. Eggs that are produced for eating are not fertilized and will never form into a chick. Eggs that have been fertilized have the potential of developing into a chick if the environment is correct. Eggs can be hatched in an incubator or by a hen. If the process takes place naturally, the hen will lay a clutch of 8-13 eggs, by laying one per day for 1-2 weeks. Once she starts laying on the eggs or brooding it takes 21 days for the chick to develop and be ready to hatch.  The mother hen keeps the eggs warm and only leaves the nest briefly to feed. The hen also turns the eggs several times per day to keep the embryo from sticking to one side of the shell. For a detailed lesson plan on egg development, see Eggology. The same process can take place in an incubator. The eggs are maintained at the proper heat and humidity levels and turned every few hours for the duration of the 21 days until they hatch.

Once the chick has hatched and dried, it will be covered in a soft, fuzzy down. Within a few weeks as the chick grows, it will develop it's adult feathers. In 4-6 months the chicken will be fully grown. Hens will begin producing eggs around 5-6 months of age and the cycle can begin again. Common breeds of chickens used for meat in the broiler industry grow very quickly. They can grow from hatch to harvest in as little as 8-12 weeks! 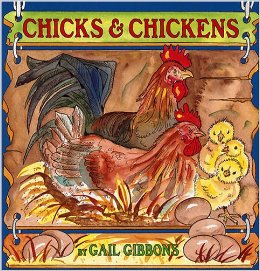 Living things (plants and animals, including humans) need water, air, and resources from the land to survive and live in habitats that provide these necessities. The physical characteristics of plants and animals reflect the habitat in which they live. Animals also have modified behaviors that help them survive, grow, and meet their needs. Humans sometimes mimic plant and animal adaptations to survive in their environment.

1-LS1: From Molecules to Organisms: Structures and Processes