A Recipe for Genetics: Selective Breeding and Transgenics

agriculture: the science, art, or practice of cultivating the soil, producing crops, and raising livestock and in varying degrees the preparation and marketing of the resulting products

animal husbandry: the science of breeding and caring for farm animals

The development of agriculture, or the intentional production of plants and animals for human use, allowed people to settle in one place and form villages and cities. Approximately 10,000 years ago, the domestication of plants and animals for human use began to develop rapidly. As hunter-gatherers became farmers, they learned to select and save seeds from plants that produced the best crops and to breed the animals that were best suited to meet people’s needs. The first steps of domestication probably happened by accident, but soon farmers deliberately practiced selective breeding to develop crops and livestock more suited to their needs.11 Selective breeding was likely the earliest form of biotechnology used by humans to improve the genetic characteristics of plants and animals. Biotechnology includes any use of science or technology to alter the genetic characteristics of a particular plant or animal. There are many examples of biotechnology. This lesson illustrates two— selective breeding and transgenesis.

Selective breeding (also known as artificial selection) is a technique still extensively used by crop and livestock producers today. Selective breeding allows producers to select and breed parent organisms with desired traits to produce offspring with more desirable characteristics. This process creates offspring who are genetically superior to the parent organisms, thus improving plants and animals with each generation. The successful results of selective breeding throughout the years can be seen in crop and livestock production today.

Many crops, including wheat, have been genetically improved through selective breeding. Dr. Norman Borlaug was a research scientist assigned to improve the wheat plant in Mexico. By studying genetics and utilizing selective breeding, he was able to develop short-strawed, disease-resistant wheat that was high yielding. Dr. Borlaug is known as the “Father of the Green Revolution” for his improvement of wheat and was awarded the Nobel Peace Prize for a lifetime of work to feed a hungry world.4

In the livestock industry, today’s cattle are also evidence of successful selective breeding. Dairy and beef cattle are both highly efficient animals that produce more milk and meat than in years past. Today, there are only 9 million dairy cows in the United States compared to 25 million cows in 1950; however, today’s dairy cows are producing 60% more milk.12 In 1944, the average dairy cow produced 548 gallons of milk in one year. The average dairy cow today is able to produce 2,429 gallons of milk in one year.13 Beef production has seen similar success. Compared to 1977, today’s beef ranchers are producing the same amount of beef with 33% fewer cattle.10 It is important to note that proper nutrition, better health care, and good animal husbandry also play a key role in improving genetics.

Genetically modified organisms (GMOs) can also be referred to as genetically engineered (GE) or transgenic. These terms all describe an organism that has a copy of a gene not previously found in that species.

A genetically modified crop is a crop that has had its genetic makeup altered in order to produce a more desirable outcome, such as resistance to disease, drought tolerance, or change in size.1 This type of plant breeding differs from selective breeding because scientists take the desirable gene from one organism’s DNA and transfer it to another organism’s DNA, creating a new, stronger product—one that is impossible to produce through traditional breeding.1

Currently, there are ten genetically modified crops that have been approved and are available on the U.S. market: corn, soybeans, cotton, canola, sugar beets, alfalfa, papaya, squash, apples, and potatoes. To learn more about the safety and regulatory process of GM crops refer to the Background Agricultural Connections section of the lesson plan,  Evaluating GMO Perspectives.

Activity 1: A Recipe for DNA 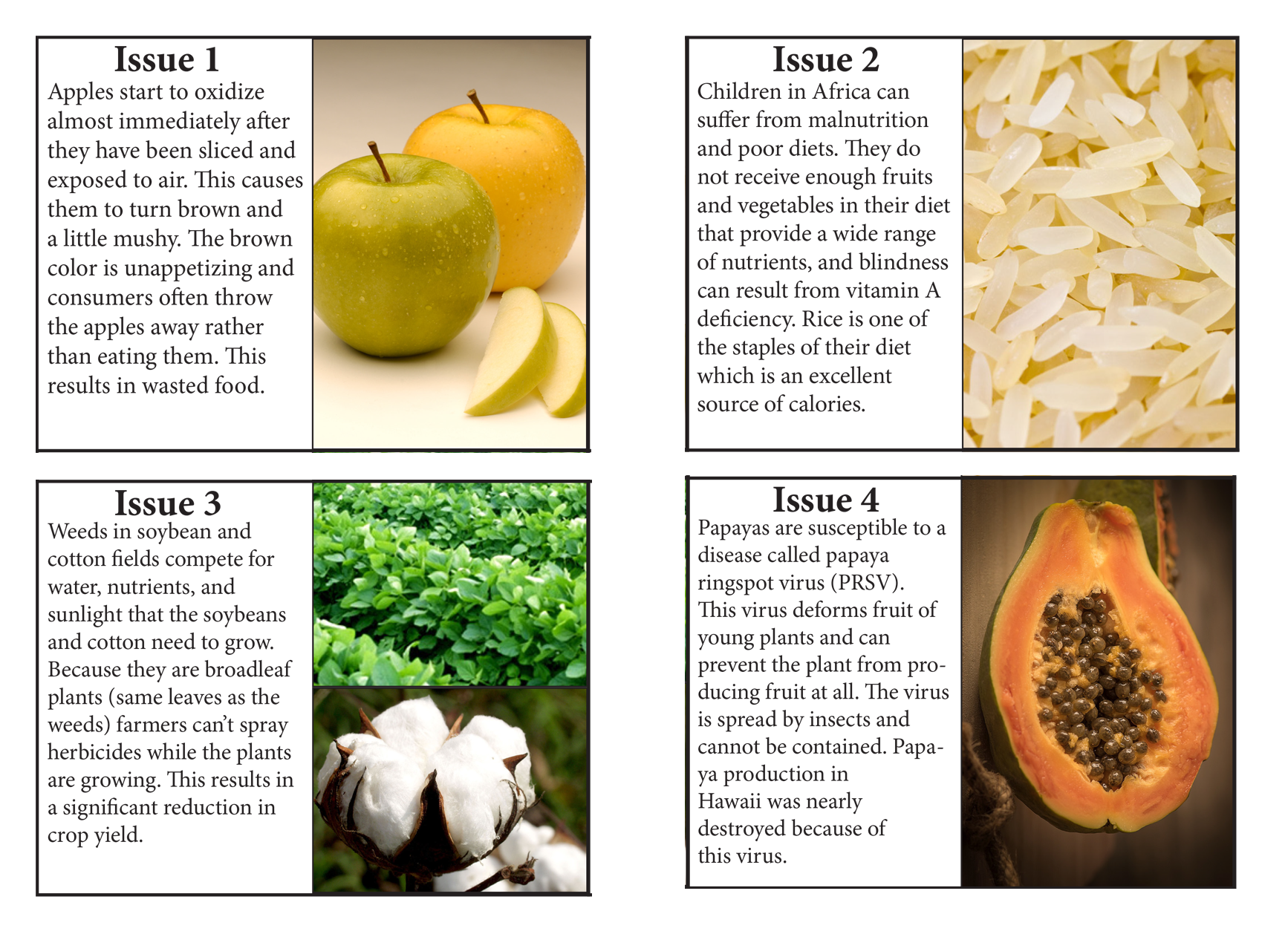