While many view bioengineered crops (GMOs) as a promising innovation, there is controversy about their use. This lesson provides students with a brief overview of the technology, equipping them with the ability to evaluate the social, environmental, and economic arguments for and against boengineered crops (GMOs). This lesson covers a socioscientific issue and aims to provide students with tools to evaluate science within the context of social and economic points of view. Grades 9-12

Engage and Activity 1: Bioengineering and Me

Activity 2: Assessing the Risks and Benefits of GMO Crops

Activity 3: How Genetic Engineering is Used in the Production of our Food

acrylamide: a chemical substance which forms in starchy foods after high-temperature cooking processes such as frying, roasting, and baking

inbreeding: selectively breeding closely related plants or animals in an effort to isolate and perpetuate a desired trait

mutagenesis: a method of selective breeding in plants where seeds are exposed to chemicals or radiation to promote DNA mutations that could result in developing new traits in offspring plants

This lesson provides a brief introduction to genetic engineering in plants. After the introduction, students assess the risks and benefits of genetic engineering, learn why farmers would choose to grow a bioengineered (GMO) crop, and begin to recognize various perspectives about this controversial topic. To learn the scientific steps of creating a bioengineered seed variety see the lesson The Science of a GMO.

Traditional plant breeding has been used since humans began domesticating plants for food production. Early crop domestication was accomplished by using basic plant selection techniques to identify and promote ideal food plants. This is known as selective breeding. Crossbreeding, inbreeding, and hybridization are specific plant breeding methods that fall under the umbrella of selective breeding. These methods have allowed farmers to isolate genes for specific characteristics and progressively create more plants well suited to provide an abundant supply of nutritious food (e.g., fruits, vegetables and grains). For example, tomatoes come in many varieties, including large slicing tomatoes and smaller roma, cherry, and grape tomatoes. Tomatoes also come in a variety of colors, including from bright red, orange, yellow, and even a dark burgundy color. In addition to color and size, these plants also vary in taste, shelf life, and the amount of time they take to grow from seed to fruit. All of these characteristics were brought about by selective breeding; identifying desirable traits and continually cross-pollinating plants with those traits to eventually create a variety with desirable characteristics. Often in traditional plant breeding processes plants will gain either a resistance or a propensity toward disease. All of these characteristics vary from variety to variety due to the plants changing genetics from generation to generation. While these traditional plant breeding methods have been successful, they can take a significant amount of time (years or decades) to achieve the desired result, and it can be difficult to isolate individual traits such as disease or pest tolerance, color, flavor, or any number of other traits. In addition, the desired gene or characteristic must already be available in the plant's gene pool.

Another method of plant breeding is called mutation breeding, or mutagenesis. This is the process of exposing seeds to chemicals or radiation in order to promote DNA mutations to maximize genetic diversity in an effort to create new traits in plants.5 In biology, a mutation is a permanent alteration in the DNA sequence. Some mutations cause little affect on an organism and others cause dramatic change. Mutations occur randomly, but are accelerated by exposure to UV rays, radiation, and some chemicals. Through the years, mutagenesis has helped create genetic variability and produce desired characteristics in crops such as wheat, barley, rice, cotton, sunflowers, and grapefruit.5 Mutagenesis can elicit results much faster than cross breeding or inbreeding. However, the changes are random and unpredictable.

Crossbreeding, inbreeding, hybridization, and mutagenesis are all traditional plant breeding techniques and do not use biotechnology. The resulting plants are not considered bioengeneered (GMO), although many people hold the common misconception that they are.

The Development of GM Crops

The first genetically engineered plant was created in 1983 when an antibiotic resistant gene was inserted into a tobacco plant.7 The first genetically modified food was the Flavr Savr tomato, created in 1994. This tomato had an extended shelf life, allowing it to be vine ripened and then shipped to grocery stores without rotting. However, production of the Flavr Savr tomato stopped three years later. Although the fruit had the desired extended shelf life without rotting, it still softened, making it little better than its traditional counterparts.8 Since that time, novel genes have been inserted into many crop plants. Genetically engineered crops have specific traits such as the following: 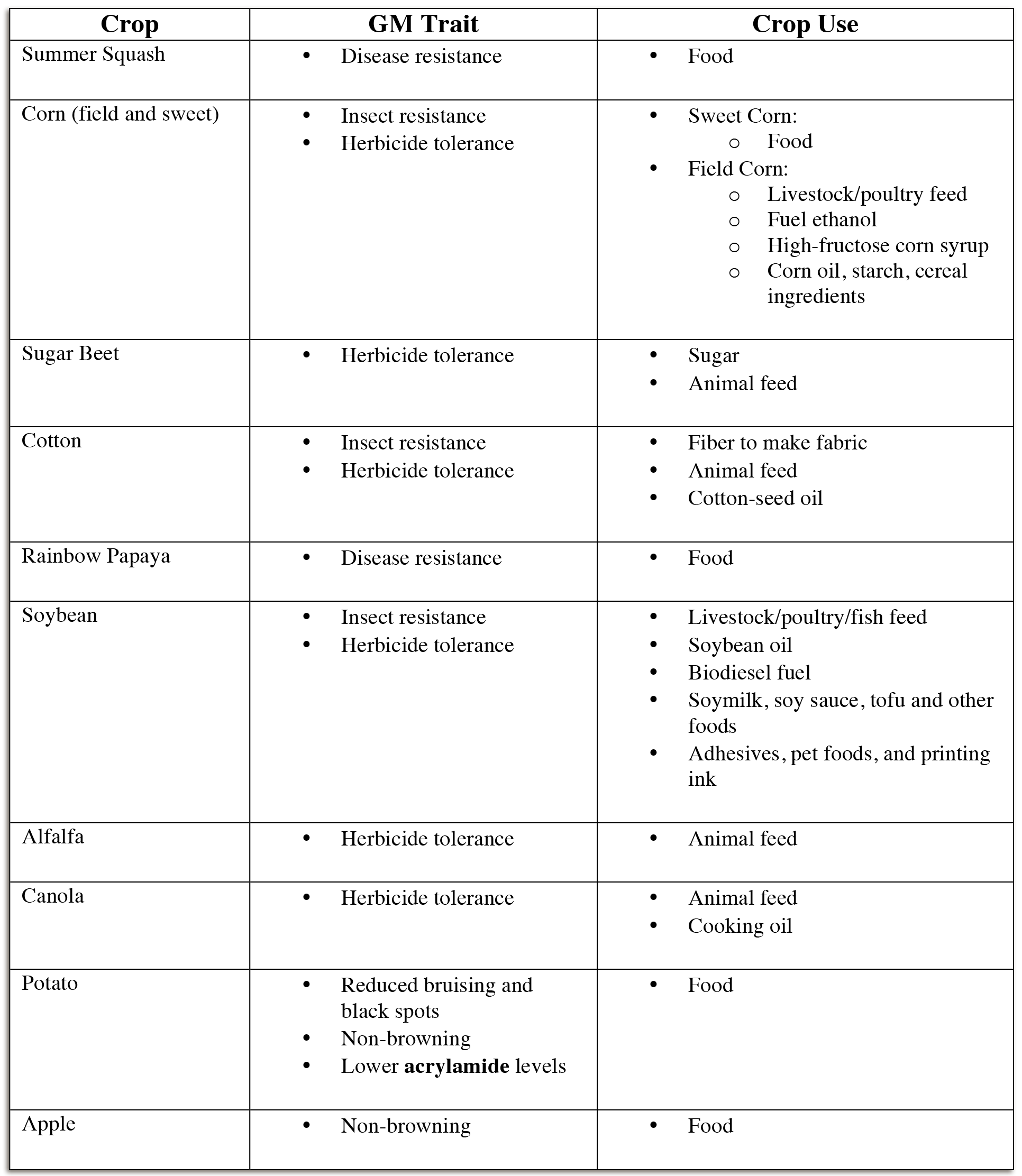 The Safety of Bioengineered Crops

While many view bioengineered crops as a promising innovation, there is still much controversy surrounding their use. This debate is taking place worldwide. There are many questions being raised in the minds of consumers. How do bioengineered crop varieties impact the environment? Is food from a bioengineered plant safe for consumption? How does the production of bioengineered crops impact communities and economics from various points of view?

It takes many years for a GM crop to be developed, tested, and finally approved for commercial release. Prior to their release, bioengineered crop varieties are monitored and regulated by three primary agencies in the United States:

After careful consideration by these three agencies, a bioengineered crop may be approved. After approval, seeds are made available for purchase and farmers can choose to grow the bioengineered variety or not. It's important to understand that not all farmers choose to grow bioengineered crop varieties even when they are available. Some choose to use conventional crop varieties and control pests, weeds, and disease using other methods. A small percentage of farmers choose to grow and market food that can be certified and labeled as organic. Organic label foods cannot be grown from genetically modified seeds and have specific regulations for how weeds and pests are managed. Although many studies have been conducted, none have proven that organic foods are nutritionally superior to conventionally grown foods.11 However, many consumers still choose organic. The organic food industry has shown increased consumer demand over the last decade and some farmers have adopted this production method to meet the consumer demand.12

Although there are benefits to utilizing biotechnology, its important to recognize the risks as well. While great effort and extensive research is put into the development and approval process of GM crops, scientists are looking for negative impacts that could still be observed. One risk is of plants, particularly weeds, developing tolerance to the herbicides that are used to kill them. This is possible through the simple biological process of evolution as the weed can become more hardy with each generation and eventually become tolerant of the chemical.13 This process can happen with non-GM crops, but scientists are aware that it could happen faster with GM crops. Other risks that scientists test prior to release of a GM crop, and that they continue monitoring carefully, include how the crop affects non-target organisms (insects, fungi, soil biota), how the crop affects the biodiversity of the ecosystem, if the transgenes escape and affect other plants and/or organisms, and how the biodiversity of the ecosystem is potentially affected.

As a consumer, it can be difficult to wade through information about bioengineering. There are many groups who strongly advocate against bioengineering as well as others who advocate for it. It is important to seek credible scientific evidence, then make your choice as you purchase your food. To make a decision about the production and consumption of bioengineered food crops, the science and safety may be sound, but there may be other considerations to evaluate. In some situations bioengineering may be a solution, in others, it may solve one problem but create another.

This lesson has been adapted for online instruction and can be found on the 9-12th grade eLearning site.

This lesson has been adapted for online instruction and can be found on the 9-12th grade eLearning site.

CCSS.MATH.PRACTICE.MP3 Construct viable arguments and critique the reasoning of others. Students understand and use stated assumptions, definitions, and previously established results in constructing arguments. They make conjectures and build a logical progression of statements to explore the truth of their conjectures. They are able to analyze situations by breaking them into cases, and can recognize and use counterexamples. They justify their conclusions, communicate them to others, and respond to the arguments of others. They reason inductively about data, making plausible arguments that take into account the context from which the data arose. Students are also able to compare the effectiveness of two plausible arguments, distinguish correct logic or reasoning from that which is flawed, andâif there is a flaw in an argumentâexplain what it is.