Students will use the Claim, Evidence, and Reasoning model to evaluate styles of housing used for hens that lay eggs. Using critical thinking skills, students will compare housing styles, determine which system meets their animal welfare standards, and engineer their own hen house model to meet the needs of laying hens. This lesson covers a socioscientific issue and aims to provide students with tools to evaluate science within the context of social and economic points of view. Grades 9-12

*These items are included in the Hen House Prototype kit, which is available from agclassroomstore.com

*These items are included in the Arduino Microcontroller kit, which is available from agclassroomstore.com

critical thinking: the objective analysis and evaluation of an issue in order to form a judgement

Modern Egg Production Practices
Eggs are laid by all types of birds, but chicken eggs are the most consumed egg. Chickens are cost-efficient to raise and can produce approximately one egg per day during their peak production. Eggs shells can be white, brown (light or dark), and even a light shade of green or blue. The shell color is determined by the breed of the chicken laying the egg. White hens have white earlobes and lay white-shelled eggs. Hens with red feathers and red earlobes lay brown-shelled eggs. White-shelled eggs are most common in the United States because White Leghorns are the most common breed of chicken to raise for egg laying due to their egg producing capacity and their smaller size when compared to other breeds of chickens. It is common for brown-shelled eggs to cost more than white eggs. It costs farmers more to produce brown-shelled eggs due to the size difference in the hens. Larger hens require more feed, but don't produce more eggs.

On egg farms, several types of hen housing systems are used. These systems include conventional style barns, cage free, free range, and enriched colony housing. Common to each system is continuous access to feed, water, and fresh air. All eggs, regardless of the type of farm they were produced on, provide the same level of nutrients to our diet.4 Egg farming has changed through the years as farmers have sought to produce a safe, nutrient rich, and economical food product for consumers.

History of Egg Farming5
In the 1920s and 1930s, egg farms were still mostly backyard systems. Many farmers had laying hens to supply their own families with eggs and would sell any extra eggs at local farmers’ markets. As selling eggs became profitable, some farms started building up flocks of about 400 hens. The hens roamed around outside with a coop for roosting. Living outside presented some problems, mainly with weather and predators. Social issues within the flock such as the “pecking order” were also a problem because bigger and more aggressive hens would eat more of the food, leaving less for the other hens. Disease transmission was also a problem. In the early 1900s, hens were laying about 150 eggs per year and had a mortality rate of about 40 percent. As the industry began to grow, selective breeding and new animal husbandry practices helped to cultivate healthier flocks. The strongest, healthiest hens with good egg-laying records were chosen by hatcheries to be parents. These parents passed along favorable genetic factors, such as disease resistance, to their offspring.

Research on moving hens to indoor living showed many benefits. While they were expensive, specialized large hen houses resulted in much healthier hens. When living indoors, the hens weren’t exposed to predators and the elements, including temperature extremes. Indoor housing also helped to prevent parasite infestations and reduce the spread of diseases from outside carriers such as rodents and even humans. Instead of the hens eating whatever they found outside, feed could be better controlled indoors. Better feeding practices improved both hen health and egg productivity. These changes reduced hen mortality to 18 percent per year.

In the late 1940s, some poultry researchers had favorable results with raised wire-floor housing for hens. The separated wire housing came to be called the conventional system. Sanitation greatly improved when hens were raised off the floor. Neither the hens nor the eggs came into contact with waste, and waste removal was much easier. Feeding became more uniform as the more timid hens were able to eat and drink as much as they required, just like the more aggressive hens. This resulted in more uniform egg-nutrient quality and less feed being needed for the flock.

The scientific research on conventional housing proved itself. A healthy hen will lay a lot of eggs. With much improved health, hens each produced about 250 eggs per year and their mortality dropped to 5 percent. Based on these numbers, more and more farms across the country built new facilities with the conventional style of housing. Improving the health of hens through more protective housing and better feeding facilities led to more eggs which led to increased automation to handle the eggs. With increased automation, labor costs were reduced, providing a lower cost to the consumer. In addition to much improved hen health, equal opportunity feeding also made the nutrient quality of eggs more uniform.

Animal Welfare in Laying Hens
From the early to the late 1900s, the egg laying industry changed from backyard chicken flocks to large scale, highly sophisticated operations. Decades of research through the 1900s led to what is known as conventional-style hen housing. Although the conventional system was developed using research to diminish the occurrence of disease, improve egg production and overall health of hens, and protect flocks from predators, this style of hen housing has faced some scrutiny. Alternative hen housing styles have emerged and are marketed using specific labels on egg cartons. This lesson provides students with the opportunity to use critical thinking skills to evaluate hen housing systems and consider different aspects of animal welfare. 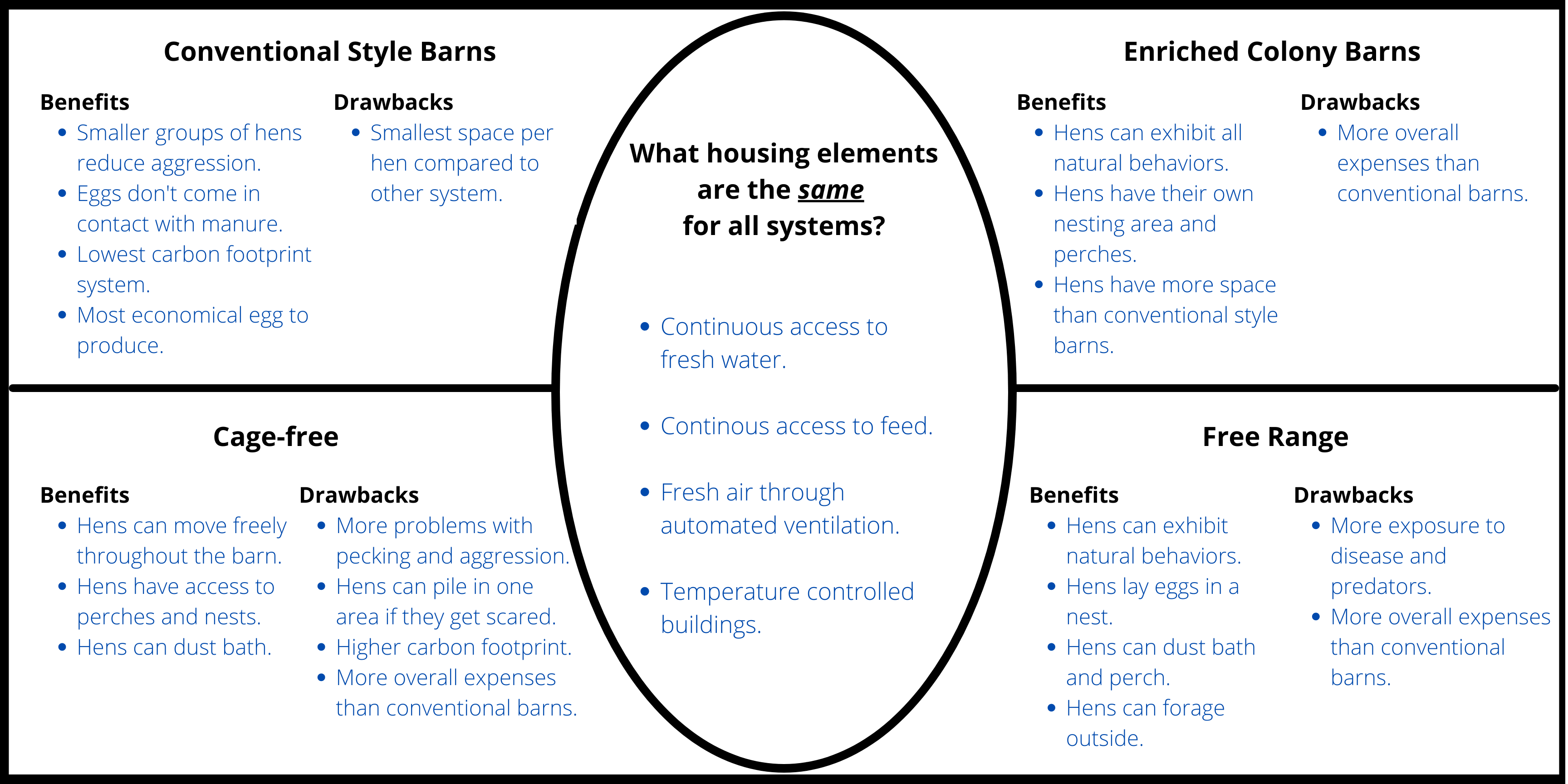 The following activity is designed in stages allowing teachers to complete the stages based on their available time, resources, and curriculum needs.

To continue the engineering portion of the hen house design, students need a basic knowledge of electrical circuits. If students do not have this prior knowledge, complete the Introduction to Circuits activity. In the activity they will complete the Paper Circuits worksheet and build four circuits using copper tape, LEDs, and a 3V coin cell battery. If they already have a basic understanding of electrical circuits, skip to the next stage.

Spotlight a career in agricultural engineering by viewing the video, Agricultural Engineering by ThinkTVPBS. Discuss engineering careers in the context of the egg laying industry. Discuss the role of engineering in developing automated systems for temperature control, ventilation, manure management, egg collection, etc.

Hold a class discussion about the value and impact of scientific research. Ask students, "How valuable is the research study conducted by the Coaltion for Sustainable Egg Supply?" (Used in Activities 2 and 3) Discuss some limitations of research. Read the last paragraph found on page 3 of the research report which sets in context the results of the research study.

Learn more about photoperiodism and how it impacts egg production using the lesson plan, Photoperiod Phenomena.

Dig deeper into the business and marketing aspect of egg production with the lesson plan, Weighing in on Egg Labels, Supply and Demand.

Take a virtual reality field trip to an egg farm that uses enriched colony housing by viewing the 360 video Farm Food 360 Tour - Egg. This video is best viewed using a virtual reality (VR) viewing device, but can also be viewed on a computer, smart phone, or tablet without a VR viewer. VR viewers are available for purchase at agclassroomstore.com.