Students will explore the path food takes along the Farm-to-Table Continuum. They will begin on the farm and investigate food safety issues during processing, transportation, at restaurants and supermarkets, and finally, in their own homes. Teams will identify how food can become contaminated along the continuum and develop and present strategies for preventing contamination at each step. Grades 9-12

compost: a mixture made of decaying organic material used to fertilize plants and amend soils

E. coli: a bacterium commonly found in the intestines of humans and other animals, where it usually causes no harm; some strains can cause severe food poisoning, especially in old people and children

salmonella: a foodborne pathogen sometimes found in the intestines of chickens

Everyone along the Farm-to-Table Continuum plays a major role in keeping our food safe. If a link in this continuum is broken, the safety and integrity of our nation’s food supply can be threatened. There are many places on a farm that can be contaminated by harmful bacteria, so farmers have to make sure that the areas where food is handled are kept clean and at the right temperature. There are many innovations on the farm that help prevent the growth of bacteria — like special areas for washing vegetables, refrigerated storage areas for milk and eggs, and portable sanitation in fields.

Salmonella is a foodborne pathogen sometimes found in the intestines of chickens. It can be passed on in the meat and also inside the chicken’s eggs. The best way to reduce the risk of foodborne illness from eating contaminated chicken is to prevent Salmonella from living in the animal in the first place.

Young mammals are born with undeveloped gastrointestinal tracts. It’s fertile ground for both good and bad bacteria. Whichever organisms get introduced to their systems first will take over.

Scientists developed mixtures of beneficial bacteria to prevent bad bacteria like Salmonella from colonizing and infecting the chickens. To make it work, scientists use a blend of nonpathogenic bacteria found naturally in the gastrointestinal tract of mature chickens and spray it on day-old chicks. Through the natural interactions of the chickens grooming each other, the bacteria enter their intestinal tracks.

Competitive exclusion results in naturally disease-resistant, mature, healthy birds — making it virtually impossible for Salmonella to multiply. It also reduces Salmonella in the farm environment overall because there are fewer infected birds to contaminate the farm.

Another way farmers keep down the spread of bacteria is through composting.

Compost is actually made up of the decomposed parts of all the residuals that come from the farm operation — the waste from the animals, leftover food the animals didn’t eat, hay/straw, etc. It all gets mixed together and heaped up so that the microbes can eat it and create compost, which the farmers use to fertilize their crops.

The microbes are basically getting a workout from eating all of the organic materials. As the microbes work at digesting the wastes in the compost, the temperature of the compost rises. The heat plays an important role, because E. coli O157:H7 can’t survive in temperatures above 131° F (55° C).

E. coli may be found in the manure that is used in the compost. So, farmers have to be very careful about cross-contamination when the compost is used on any crops — but the risk may be greatest for low-growing crops, such as lettuce and strawberries. Scientists are working to develop ways for farmers to assure that their compost reaches high enough temperatures to kill pathogens and make the compost safe for their crops. Note: This is still in the research stage. 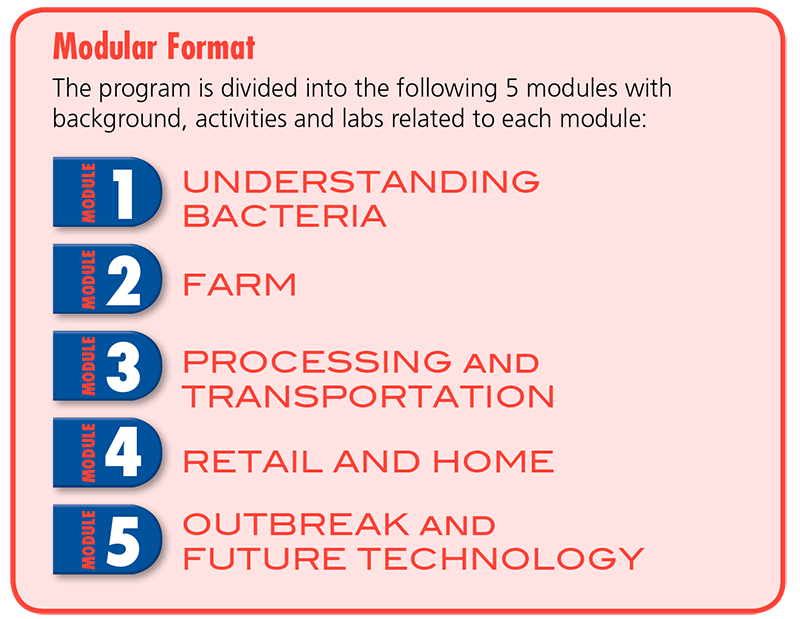 Everyone along the Farm-to-Table Continuum plays a role in keeping our food safe from harmful bacteria. If a link in this continuum is broken, the safety of our nation’s food supply is at risk. There are food safety precautions, including the 4 Cs of Food Safety, that help prevent contamination of food at each step.

Students will review and apply the skills of kitchen management, safety, and sanitation.