This lesson describes the role of fats in food and in the body, and how they serve as a source of energy. It provides information on different types of fats that are listed on the Nutrition Facts label – including total fat, saturated fat, and trans fat—and defines trans fat and cholesterol. The lesson also includes dietary guidance for fat consumption. Grades 6-8

Activity 1: Get the Facts about Fats!

Note: All worksheets can be downloaded as a fillable PDF.

lipids: fats, oils, and waxes which are produced by living things

saturated fat: a type of fat containing a high proportion of fatty acid molecules without double bonds, considered to be less healthy in the diet than unsaturated fat

unsaturated fat: a type of fat containing a high proportion of fatty acid molecules with at least one double bond; considered to be healthier in the diet than saturated fat

Lipids are a large group of organic compounds that are oily to the touch and insoluble in water. Lipids include fats, oils, and waxes and are a source of stored energy. The terms lipids and fats are often used interchangeably. Fats are also called triglycerides, because they are usually made up of three fatty acids and a glycerol molecule. For this module, we will use the term “fat” to represent all dietary lipids. Oils are usually liquid at room temperature, high in monounsaturated or polyunsaturated fatty acids, and lower in saturated fatty acids than fats that are solid at room temperature.

Fat in foods is a major source of energy for the body and aids in the absorption of the fat-soluble vitamins A, D, E, and K. Fats are also important for proper growth and maintenance of good health, since they play a role in the structure and function of cell membranes, the integrity of skin, maintaining healthy blood cells, and fertility. As a food ingredient, fats provide taste, consistency, and stability and help us feel full.

The Daily Value for total fat is 35% of total calories, which is 78 grams/day based on a 2,000-calorie diet: saturated fats should contribute less than 10% of daily calories. All fat has 9 calories per gram, making it a concentrated source of energy, so it should be eaten in moderation. Although most people consume enough fat, many people consume too much saturated fat and not enough unsaturated fat. The Nutrition Facts label is a useful tool for checking how much, and what kind of fat is in a food. 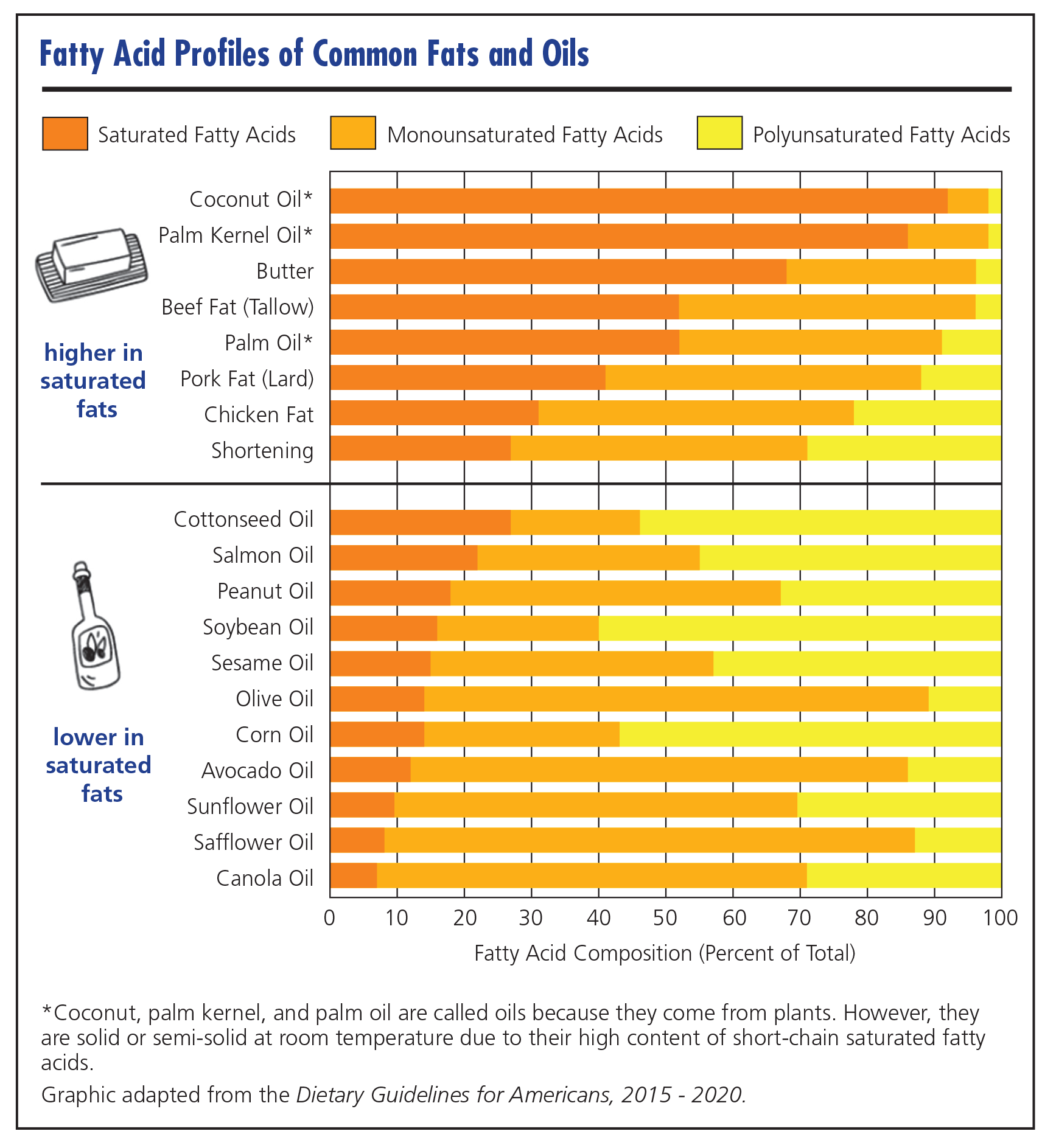 Saturated fats are typically found in animal products. Dietary fats that have more saturated fatty acids tend to be solid at room temperature. They are called “saturated” because all the spaces on the fat molecule that can hold a hydrogen atom do so and are “full” – that is, the molecule is “saturated” with hydrogen atoms.

Saturated fats taste good and reduce hunger, but eating too much of them increases the risk of cardiovascular disease. Saturated fatty acids are found in the greatest amounts in animal fats (including beef, pork, lamb, and poultry with skin), full-fat dairy products (butter, cream, cheese, and ice cream), many sweet desserts (cakes and cookies), fried foods, and some plant-based oils such as coconut oil, palm oil, and palm kernel oil.

Unsaturated fats and oils should replace saturated fats in the diet, rather than just being added to it. This allows the total amount of fat consumed to remain within recommendations without exceeding daily calorie limits. While unsaturated fatty acids are an optional listing on Nutrition Facts labels, they are included in the Total Fat category. One gram of unsaturated fat is healthier than one gram of saturated fat, but both have the same number of calories: 9 calories per gram.

About Trans Fats, A Danger Zone!

Trans fat is an unhealthy fat. Although trans fatty acids are unsaturated, they are structurally similar to saturated fatty acids and therefore behave like them. Trans fat raises LDL (“bad” cholesterol), and an elevated LDL increases the risk of developing cardiovascular disease (see the Cholesterol section below).

The National Academies of Science, Engineering, and Medicine recommends that trans fat consumption be as low as possible without compromising the nutritional adequacy of the diet. As of June 2018, partially hydrogenated oils (PHOs), the major source of artifcial trans fat in the food supply, are no longer Generally Recognized as Safe (GRAS). Therefore, PHOs are no longer added to foods. But trans fat will not be completely gone from foods because it occurs naturally in small amounts in some animal products and is present at very low levels in refined vegetable oils. This hidden fat can add up if you eat several servings of products that contain it. Learn more about trans fat at this FDA webpage.

Cholesterol is a waxy, fat-like substance made by all cells of the body. The organs that make the most cholesterol are the liver and intestines. The body uses cholesterol to produce vitamin D and certain hormones (e.g., estrogen and testosterone) and bile (a fuid that aids in fat digestion). Cholesterol in food is referred to as “dietary cholesterol” and is found only in animal products—never in plants. Cholesterol is transported in the blood by particles called “lipoproteins,” which contain both fat and protein. Over time, cholesterol and other substances can build up in the arteries and cause cardiovascular problems. The human body makes all the cholesterol that it needs, so it is not necessary to get cholesterol from food.

High Density Lipoprotein (HDL) cholesterol is often referred to as “good” cholesterol. HDL cholesterol travels from the body tissues to the liver, where it is broken down and removed. Higher levels of HDL cholesterol in the blood can help prevent cholesterol buildup in blood vessels, decreasing the risk of developing cardiovascular disease.

Low-density Lipoprotein (LDL) cholesterol is often referred to as “bad” cholesterol. It is the form that moves cholesterol from the liver to the arteries and body tissues. Higher levels of LDL in the blood can lead to a harmful cholesterol buildup in blood vessels, increasing the risk of cardiovascular disease.

Activity 1: Get the Facts About Fats!

Have students answer the following questions:

The Science and Our Food Supply: Using the Nutrition Facts Label to Make Healthy Food Choices (2022 Edition) was brought to you by the Food and Drug Administration Center for Food Safety and Applied Nutrition.