Students will identify the parts of a honey bee, the stages of its life cycle, and its role in pollination.

*These items are included in the Pollination Simulation Kit, which is available for purchase from agclassroomstore.com.

*These items are included in the Beeswax Modeling Clay Kit, which is available for purchase from agclassroomstore.com.

beeswax: a substance secreted from glands located on the underside of a worker bee’s abdomen

brood: the offspring produced by the colony (eggs and larvae)

cell: a hexagonal wax chamber built from beeswax for brood rearing and storage of honey and pollen

colony: a group living together

hive: a home to a colony of bees

metamorphosis: the process of change in the form and habits of an organism during transformation from an immature stage to an adult stage

pollination: the transfer of pollen from the anther to the stigma of a plant

propolis: a resin-like material used by bees to construct and seal parts of the beehive

royal jelly: a milky, yellow syrup secreted from a gland in a young worker bee’s head; used to feed larvae

Honey bees are extremely important to humans. Bees are pollinators. They collect pollen and nectar from flowering trees and plants and transfer pollen from flower to flower. Bees pollinate 95 different crops, helping to create nearly one-third of the world’s food supply. Honey bees use the nectar they gather from flowers to make honey, which is the only commercial food produced by insects that is eaten by humans on a wide scale. Honey bees also produce beeswax, which is used to make candles, artists’ materials, lubricants, polishes, and cosmetics. Bee venom, pollen, royal jelly, and propolis are other bee-made products used in manufacturing, and for nutritional and medical purposes.

Honey bees live in large groups called colonies. There are three types, or castes, of honey bees­­—queen, worker, and drone.

The queen bee is a female that lays eggs. Each colony has only one queen bee. The queen can live up to four years and can lay over one million eggs in her lifetime. She can lay close to one egg per minute and between 1,000-2,000 eggs a day.

Worker bees are female bees who perform many of the jobs for the colony, including feeding the larvae; cleaning the hive; creating wax and using it to make new cells; grooming and feeding the queen; guarding and protecting the hive; and leaving the hive to collect pollen, nectar, and water. Worker bees live for about six weeks in the summer and longer in the winter months when they are less active.

Drones are male bees responsible only for mating with the queen. They do not work. There are about 100 drones in each colony. They live for about eight weeks in the summer, and are then expelled from the colony and die in the fall.

The size of a honey bee’s body depends on its caste and the task it performs. The queen bee is the largest, and the worker bee is the smallest. Honey bees, like all insects, have three main body regions—head, thorax, and abdomen.

The head contains two compound eyes, three simple eyes, two antennae, mandibles, and the proboscis. The compound eyes are made up of thousands of tiny lenses that allow the bee to see ultraviolet light (invisible to the human eye) and all colors of visible light except red. The simple eyes each have a thick lens that can sense changes in brightness. The honey bee’s antennae are movable feelers that detect smells and movement. The proboscis is a straw-like tongue used to suck nectar or honey. Mandibles are jaw-like structures used to knead wax and to chew honey and pollen.

The thorax is the honey bee’s middle region containing the flight muscles, four wings, and six legs. Honey bees have two hind wings and two forewings that can beat 250 times per second allowing the bee to fly at speeds of up to 15 miles per hour. They have three pairs of segmented legs used for walking, dusting their antennae, brushing pollen off body hairs, and storing pollen. The hind legs of worker bees contain a pollen basket—a collection of hairs where pollen is stored for transport.

The abdomen is the rear region that contains organs for digestion, reproduction, and respiration as well as the stinger and wax glands. The stinger is only found in female honey bees. A worker bee’s barbed stinger is used for defense. When stinging, the barb anchors the stinger in the victim while the stinger’s pouch pumps venom. After stinging, the bee dies of an abdominal rupture. When stinging insects, the bee’s stinger remains attached while the barb tears through the target’s exoskeleton. The honey sac is a stomach-like organ connected to the digestive tract. The sac stores the nectar until the bee returns to the hive. Wax glands are located on the underside of the bee’s abdomen. These glands form and excrete wax.

The queen lays each egg into a different cell of the honeycomb. It is her job to determine whether the egg will grow into a male or female bee. Fertilized eggs will become female workers, and unfertilized eggs will become male drones. After three days, the egg hatches and a worm-like creature, called larva, is unveiled. Worker bees feed the larva royal jelly—a milky, yellow syrup secreted from a gland in the worker bee’s head. As it grows, the larva sheds its skin four to five times. On about day nine, the larva spins itself a cocoon. A worker bee seals the cocoon into the cell with wax.

Inside the cocoon, the larva transforms into a pupa—developing eyes, legs, and wings. When the bee is fully grown, it chews its way out of the cell and emerges as an adult. It takes 16 days for a queen bee to develop from an egg to an adult; worker bees take 18-22 days, and drones need 24 days.

Ask students, "Why are honey bees important to humans?" 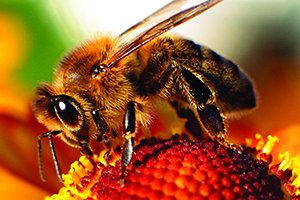 Use the following videos to further explore the world of honey bees. In Flight of the Honey Bee (2:15), a commercial beekeeper illustrates how honey bees play an essential role in the crop production process. Give your students a close-up look at a honey bee covered in pollen and hives traveling across the country to pollinate different crops.

In order to collect pollen and nectar efficiently, honey bees tell each other where to look for the best flowers. Show your students Dancing Honeybee Using Vector Calculus to Communicate (3:01).

The Harvard Microrobotics Lab breaks down the mechanics of insect flight to create a biologically-inspired insect-scaled robot, shown in this two-minute video, Tiny, Robotic Bees Could Change the World.

3-LS1: From Molecules to Organisms: Structures and Processes

4-LS1: From Molecules to Organisms: Structures and Processes