Students determine corn anatomy and function of plant parts, identify stages of plant development in corn, and research how temperature plays a role in corn growth as they calculate growing degree units (GDUs) for a region. Grades 6-8

Activity 1: Explore an Ear of Corn

commodity: a primary agricultural product that can be bought and sold

Growing Degree Units (GDUs): a measurement of the amount of heat needed for a corn plant to reach various stages of growth

husk: a dry outer covering of some fruit, seeds, or nuts

kernel: a softer, usually edible part of a nut, seed, or fruit stone contained within a hard shell

leaf: the flat or needlelike part of a plant where photosynthesis happens

node: the part of a plant stem from which one or more leaves emerge, often forming a slight swelling or knob

root: the part of the plant that grows into the soil to anchor the plant and collect water and nutrients

silks: the female parts of the corn plant which are found in the shoot that will develop into the ear of corn

tassel: the male part of a corn plant that emerges from the top of the plant and bears many small flowers that release pollen grains

vegetative: a period of plant growth between germination and flowering 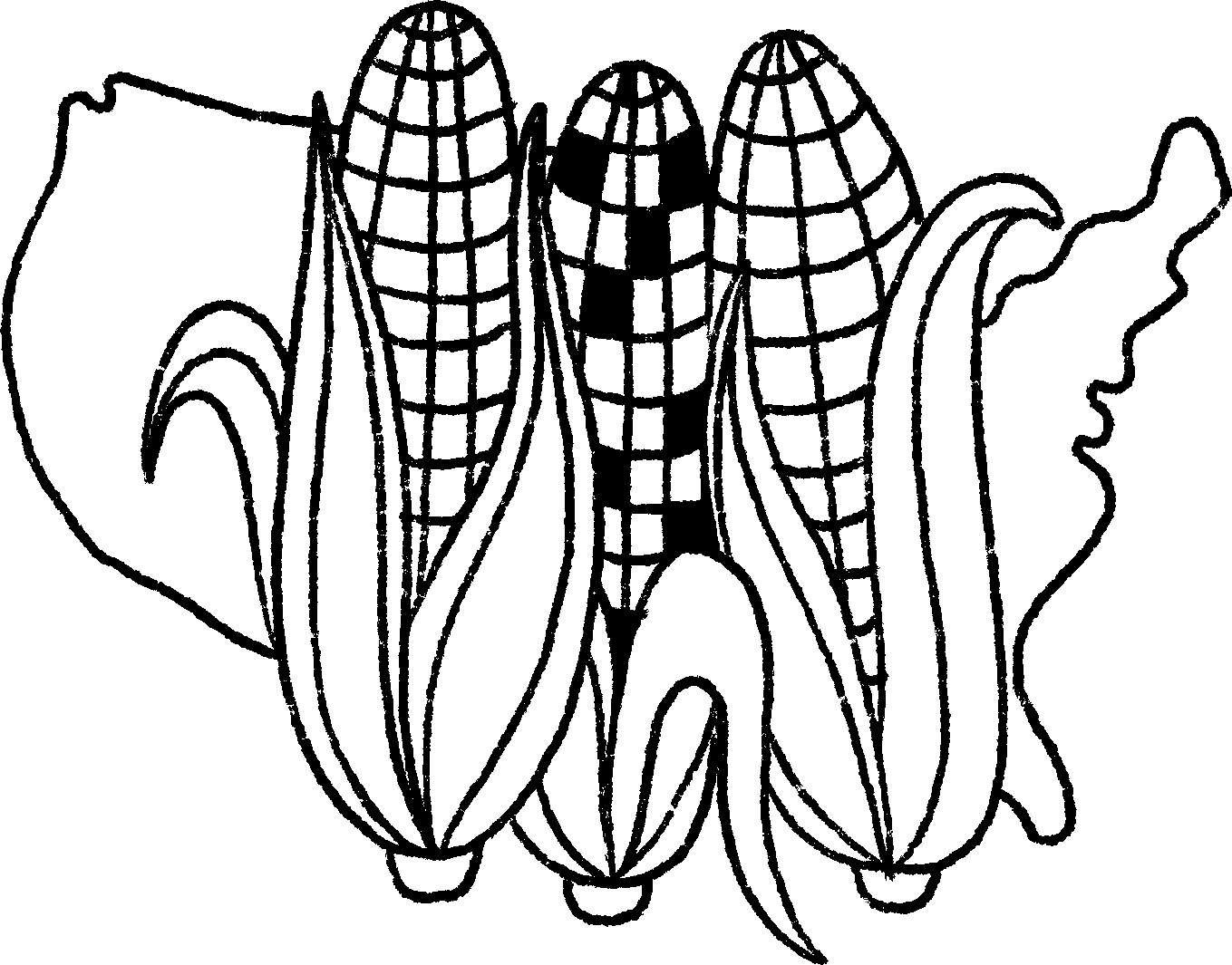 Corn is a grass, native to the Americas. Evidence in central Mexico suggests corn was used there about 7000 years ago. Various Native American tribes shared their knowledge of corn, also known as maize, with early European settlers saving many from starvation. Early American colonists ground dried corn as meal for flour to use in porridge, cake and bread. Sweet corn, served as “corn on the cob,” was not developed until the 1700s.

Along with wheat and rice, corn is one of the world’s major grain crops and the largest grain crop grown in the US. About 9% of all corn is used to produce food for humans: corn meal, cooking oils, margarine, corn syrups, and sweeteners (fructose). About 64% of all corn is used as feed for livestock. Corn is harvested for either grain or silage with most of the grain going to dairies, animal feeding operations, and poultry operations. Corncobs have been used in the manufacturing of nylon fibers and as a source for producing degradable plastics. Ethanol, made from corn, is a renewable fuel used in today’s cars.

Corn is pollinated by wind and is typically planted in 30-inch rows. A single seed, or kernel, of corn may produce a plant which yields more than 600 kernels of corn per ear. Approximately 22,000 to 35,000 individual plants may be grown on an acre of land. Hybrid corn is developed to produce from one to two ears per plant. More than 80 million acres of the US heartland are planted in corn each year.

After the corn is harvested, the farmer begins to prepare the soil for the next season by mixing in nutrients, such as potassium and phosphorus, with some form of tillage (breaking up soil) to incorporate them. In the spring, the farmer will do a light tillage pass to create smooth bedding for planting. When the ground temperature is ready (50°F and expected to rise), the farmer will plant and add fertilizer 2 inches deeper and 2 inches to the side of the kernels to help the seeds get a healthy start. After the seed is planted, most farmers will spray a pre-emergent herbicide to prohibit weed growth. When seedlings emerge and grow, the farmer will inject the soil with some form of nitrogen fertilizer before the v8 (8th leaf development) stage. This spring fertilizer will allow for the plant to green up and establish good photosynthetic activity through harvest. The farmer will continue to scout the crop through maturity for any additional pests and will harvest the crop when it is ripe in the fall.

Corn growth and development for commodity agriculture is dependent upon our understanding of corn anatomy and functionality. To gain a good understanding of corn anatomy and functionality you can visit the University of Minnesota All About Corn E- learning modules and Ohio State University's Corn Growth and Development website.

Corn is an integral component to the success of agriculture. Throughout the growing season, the corn plant undergoes a series of developmental stages as it grows from a seed at planting to a tall plant with an ear at harvest. The development of the corn plant is determined by different Vegetative (V) and Reproductive (R) stages. Please see the attached Corn growth and development poster: bookstore.ksre.ksu.edu/pubs/MF3305.pdf for details on the Vegetative and Reproductive Stages a corn plant undergoes throughout its development. V stages are determined by the total number of leaves with visible collars (e.g., a plant with 3 visible leaf collars is at V3). A collar is the offwhite band at the base of the leaf blade where it extends away from the stalk. A new leaf appears every 3 to 4 days with good growing conditions until tasseling. As the plant grows, lower leaves are lost. These leaves must be counted; otherwise, the development stage will be misidentified.

Corn needs little fertilizer boost until V5, but requires a large nitrogen intake to increase yield from V8 until VT (tasseling). Farmers sidedress (inject between corn rows) nitrogen before the V8 stage. This allows the plant to maximize its photosynthetic potential. Ear length is determined between the V12 and VT vegetative stages. Tassel emergence occurs from V17 to V22 depending upon the corn variety.

The growth rate of a corn plant is slow at the beginning of the season, but increases with the presence of each new leaf. Under non-stressful conditions, the time between new leaves will decrease as the season progresses. The plant is most vulnerable to stress during silking, when important pollination events are occurring. As the reproductive stages progress, the effect of stress on seed weight will decrease, while the effect on seed number will be minimal after R2. Highest yields will be achieved in areas where environmental conditions are favorable for these growth stages, especially R1. Unfavorable conditions early in the season will limit leaf size, which will decrease photosynthesis, while stress later in the season can affect pollination in the form of kernel size and number.

Corn growth stage development can vary according to corn maturity. An early-maturing product may produce fewer leaves or develop through growth stages faster than a slower-paced, latematuring product. This is important to remember when staging corn in relation to accumulated Growing Degree Units (GDUs).

Corn development is directly correlated with air temperature. Therefore, development varies from year to year if calendar days are only used to track progress. However, development becomes predictable within and across growing seasons when evaluated using thermal time (degree units). The time required for corn to progress from one developmental stage to another is based on the amount of heat accumulated. Thermal time represents the length of time the crop spends within a defined temperature range considered optimum for that crop. For example, shoot emergence occurs approximately 125 Growing Degree Units (GDUs) accumulate after emergence. The GDU calculation assumes that corn development is consistent and linear within the defined temperature range of 50–86°F. For more information, visit Corn Growth Stages and Growing Degree Units.

Activity 1: Explore an Ear of Corn
What do you know about this familiar plant? How do the parts of the corn plant work to produce an ear of corn?

This activity is an excerpt of the Growing America unit created by Nourish the Future.