From Boom to Dust

Students will learn how the events of World War I helped spark the Great Depression, the Dust Bowl, and the resulting New Deal by watching a video and participating in a round robin, responding in writing to images and sound bites from the Dust Bowl, and observing a wind erosion demonstration. Grades 9-12

black blizzard: the term for dust storms during the time period of the Great Depression

bushel: a unit of measurement used in US agriculture that is equivalent to a volume of 64 pints, but is generally standardized by weight for different products; a bushel of wheat weighs 60 lbs, a bushel of corn weighs 56 lbs

Civilian Conservation Corps (CCC): a public work relief program that operated from 1933 to 1942 in the United States for unemployed, unmarried men from relief families as part of the New Deal

Dust Bowl: name given to the Great Plains region that was devastated by drought during the Great Depression during the 1930s

erosion: the process by which the surface of the earth is worn away by the action of water, glaciers, winds, waves, and other natural forces

New Deal: the set of programs and policies designed to promote economic recovery and social reform introduced during the 1930s by President Franklin D. Roosevelt

topsoil: the upper layer of soil that is rich in organic matter and best suited to growing healthy crops

World War I required the ramping up of agricultural production and manufacturing, which pumped new life into the American economy. Unemployment numbers fell drastically between 1920 and 1929. The United States replaced Russia as a global agricultural supplier, and the prices for grain rose to an all-time high. Agricultural workers on the Great Plains, specifically in the southeastern region, including Colorado, Texas, New Mexico, Kansas, and Oklahoma, began taking out loans to buy more land and the latest farming equipment. Tractors allowed farmers to plant and harvest an acre in three hours rather than the three days it took by hand with manual labor. Millions of acres of native grassland, previously used for grazing, were converted into wheat fields to keep up with the rising demand.

Following WWI, there was a steep decline in demand for goods. Industries struggled, and the price of crops dropped by as much as 40%. To compensate for the price drop, farmers tilled more land and grew more crops. Instead of bringing in extra revenue, the added production further depressed the market. In 1929 the price of grain dropped abruptly from $3.00 to $0.40 per bushel. Farmers who had taken out loans faced foreclosure. From 1929 to 1932, four million farms were lost to foreclosure.

When the stock market crash known as Black Tuesday hit on October 29, 1929, the United States experienced a financial collapse that ushered in the Great Depression. In the early days of the Great Depression, life in rural areas was not as difficult as in urban areas because rural people could produce their own food. But when drought struck the Great Plains in the 1930s, rural areas were the next to suffer.

Across the Great Plains, people had plowed up the drought-resistant native grasses to grow grain. With prolonged drought the grain
withered and died, and the ground lay barren, exposing nutrient-rich topsoil to the elements. The lack of vegetation meant that no roots were left to stabilize the soil, and the result of these conditions was what we now call the Dust Bowl. Topsoil was carried by the wind in dust storms deemed “black blizzards” because the dust was so thick it would blot out the sun. The wind carried off an estimated total of 350 million tons of soil (a volume that would fill enough dump trucks to circle the earth twice). When the worst black blizzard on record hit in 1934, towers of dust 10,000 feet high moved soil from Colorado, Texas, New Mexico, Kansas, and Oklahoma 1,500 miles east to the Atlantic Ocean. An estimated twelve million pounds of soil or “dust” hit Chicago (four pounds of soil per citizen) during this one storm. Some ships out at sea in the Atlantic Ocean were left with a quarter inch of dust on their decks.

Topsoil was not the only thing leaving the Dust Bowl. Continual black blizzards contributed to the poverty of the people in the affected states, and more than 2.5 million people fled the region—most taking Route 66 west. Nearly 10% of people fleeing the Dust Bowl relocated to California. Franklin D. Roosevelt, (FDR) was aware of farmers’ suffering (30% of the population at that time were farmers) and the country’s struggle. When he took office in 1933, FDR had already assembled the “brain trust” responsible for formulating the new policies that became known as the New Deal. The New Deal included work relief programs like the Civilian Conservation Corps (CCC) that provided jobs to the unemployed, poverty relief programs like the Social Security Act that provided income to retired workers, and programs like the National Industrial Recovery Act that provided funding to fight soil erosion and more. 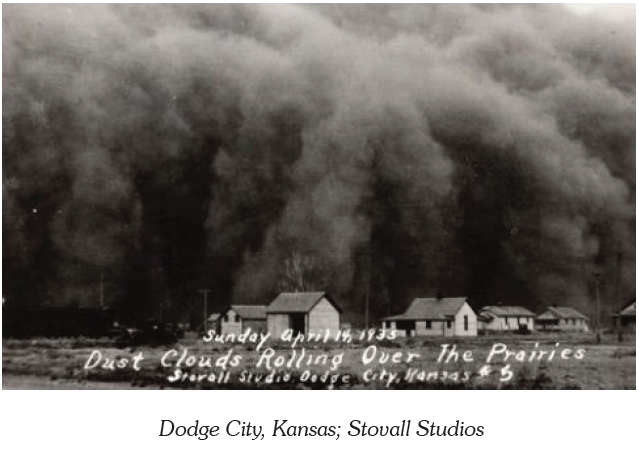 The goal of these New Deal programs was to ensure that the country recovered economically as well as environmentally. In 1935 the Soil Conservation Service (SCS) was formed specifically to reduce soil erosion and promote soil conservation to prevent the formation of any more dust bowls. In 1994 the SCS was renamed the Natural Resource Conservation Service (NRCS). The goal of the NRCS today is to help farmers provide a sustainable, nutritious, abundant food supply and protect healthy ecosystems that support a diversity of life. The NRCS continues to work to protect healthy soil and clean water, while also tackling rising issues such as clean air, clean energy, and climate change and exploring new conservation technologies.

Economic boom, bust, and the role of the government

History Era 8 Standard 2A (Grades 9-12): The New Deal and the presidency of Franklin D. Roosevelt.