Six Kinds Do It All

Activity 2: Simple Machines—Can you Match Them?

axle: the bar or rod on which or with which a wheel or wheels turn

inclined plane: a flat surface that is higher on one end; a simple machine used to move objects to a lower or higher place

lever: a device which pivots on a fixed point called a fulcrum

machine: an apparatus using or applying mechanical power and having several parts, each with a definite function and together performing a particular task; a device used to help make work easier

pulley: a wheel over which a rope or chain passes; used to lift or move things

screw: theoretically a rolled up inclined plane; a simple machine used to hold objects together or lower and raise things

simple machine: aÂ device that changes the magnitude or direction of a force

wedge: a triangle-shaped object with one pointed end and one thicker end; a simple machine used for raising, holding, or splitting objects

wheel: a disk or circular object arranged to revolve on or along with an axle that passes through its center

This lesson is part of a series called Simple and Complex Machines Used in Agriculture. These lessons introduce students to the simple and complex machines used in their daily lives and in food and fiber production. Through a variety of hands-on activities, students create models of the six types of simple machines and discover the concepts of force and friction. The essential role of complex machines in people's daily lives and in agriculture is interwoven through a number of class and homework activities that incorporate cooperative learning, writing, mathematics, art, and drama. Together these activities are designed to stimulate creative thinking and motivate learning. Other related lessons include:

Preview the entire set of activities before you start and determine the length of time (or days) it will take you to complete the activities. Make the lesson appropriate for your students and class schedule. Be sure to have a wall display that lists the names of the six simple machines. Leave room to write in examples.

Discuss with the students that each team will do the following for each simple machine:

Activity 2: Simple Machines—Can You Match Them? 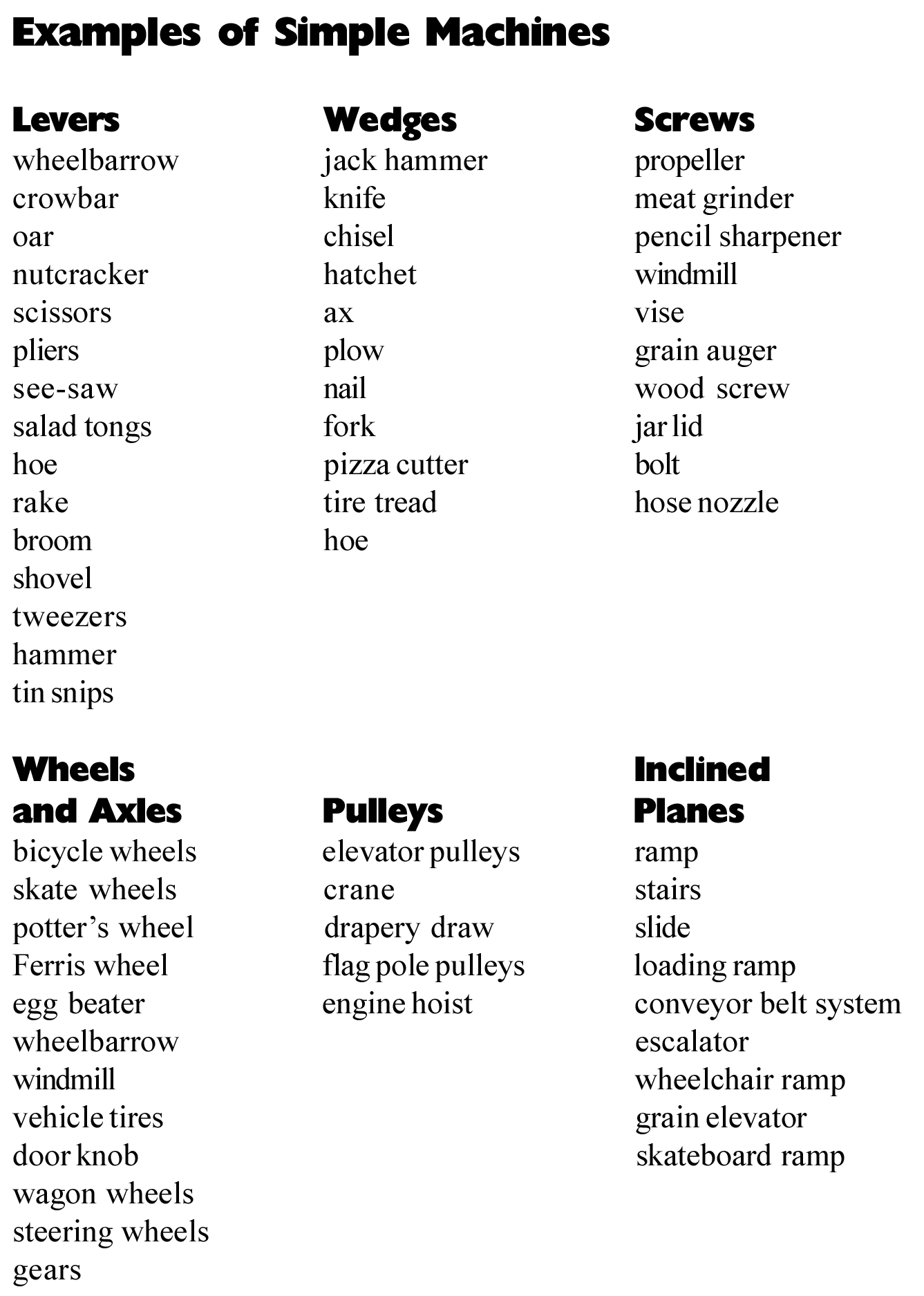 After conducting these activities review and summarize the following key concepts:

This lesson was funded in 1996 by the California Beef Council and the California Farm Bureau Federation. To meet the needs of California educators, Simple and Complex Machines Used in Agriculture was revised to support the Curriculum Content Standards for California Public Schools and updated to include recent agricultural innovations. Funding from the Wells Fargo Foundation made this revision possible.

California Foundation for Agriculture in the Classroom

Forces act on objects and have both a strength and a direction. An object at rest typically has multiple forces acting on it, but they are balanced, resulting in a zero net force on the object. Forces that are unbalanced can cause changes in an objectâs speed or direction of motion. The patterns of an objectâs motion in various situations can be observed, measured, and used to predict future motion. Forces are exerted when objects come in contact with each other; however, some forces can act on objects that are not in contact. The gravitational force of Earth, acting on an object near Earthâs surface, pulls that object toward the planetâs center. Electric and magnetic forces between a pair of objects can act at a distance. The strength of these non-contact forces depends on the properties of the objects and the distance between the objects.

World History Era 7 Standard 5A (Grade 5): Connections between major developments in science and technology and the growth of industrial economy and society.

CCSS.ELA-LITERACY.CCRA.W.1 Write arguments to support claims in an analysis of substantive topics or texts using valid reasoning and relevant and sufficient evidence.