adapt: to change so as to fit a new or specific use or situation

colchicine: a poisonous alkaloid c22H25No6 that inhibits mitosis, is extracted from the corms or seeds of the autumn crocus (colchicum autumnale), and is used especially in the treatment of gout and to produce polyploidy in plants

diploid: cells that have two complete sets of chromosomes, one from each parent

meiosis: the cellular process that results in the number of chromosomes in gamete-producing cells being reduced to one half and that involves a reduction division in which one of each pair of homologous chromosomes passes to each daughter cell and a mitotic division

mitosis: a process that takes place in the nucleus of a dividing cell, involves typically a series of steps consisting of prophase, metaphase, anaphase, and telophase, and results in the formation of two new nuclei each having the same number of chromosomes as the parent nucleus

tetraploid: having or being a chromosome number four times the monoploid number

triploid: having or being a chromosome number three times the monoploid number

Mitosis, Meiosis, and Watermelons
Both mitosis and meiosis are processes that reproduce cells. Mitosis produces exact genetic copies of cells to allow growth as well as to replace worn out cells. One cell can divide into two cells, called daughter cells. Each cell has an exact and identical copy of DNA with a full set of chromosomes. The chromosomes are threadlike structures found in the nucleus of living cells carrying genetic information, known as DNA, in the form of genes. In the case of watermelons, they have 22 chromosomes. Mitosis divides cells allowing one cell to become two, two cells to become four, and so on. Mitosis allows watermelon to grow from small to large. For this lesson student's understanding for sexual and asexual reproduction would be required for helping them gain an understanding for producing a hybrid such as seedless watermelons.

Meiosis differs from mitosis in that it only takes place in the reproductive organs to produce gametes, or reproductive cells. Reproductive cells are produced through the process of meiosis. Meiosis is different than mitosis because it produces cells with only half the total number of chromosomes. In the case of a watermelon, the male sperm cell and the female ovule each have 11 chromosomes. When fertilization takes place a single cell is formed with a complete set of 22 chromosomes.

Development of the Seedless Watermelon
O.J. Eigsti was a botanist and plant geneticist from Goshen, Indiana who discovered that colchicine, a chemical derived from crocus plants, could cause a plant to double its chromosomes. A Japanese scientist named Kihara used Eigsti’s chromosome-doubling process to produce the first seedless watermelon.

For Kihara, the next step was to cross-breed a tetraploid with a normal diploid as the pollinator. Since cells from each plant contribute half their chromosomes in the reproduction process, the result was a triploid plant. Triploids have three sets of chromosomes per cell (tri- means three). This triploid seed will germinate and grow into a triploid plant bearing triploid male and female flowers, but the flowers will not produce viable sperm-bearing pollen or eggs because of the odd number of chromosome sets (3). With three sets of chromosomes, one set will not have a matching set to pair up with during meiosis.When flowers of this sterile triploid plant (called the seedless watermelon plant) are pollinated by a normal plant, seedless fruits develop.

Instead of planting seed in the field, growers buy plants from companies that start the seed under very restricted conditions. The seeds are placed in a soilless mix, watered only once, soon after planting, and covered with plastic. They are kept at temperatures between 90 and 100 degrees F. for 2-3 days, until they germinate. At that time they are moved to a greenhouse where they are treated like any other plant.

After 2-3 weeks they are shipped out to the watermelon fields for planting, where they grow vigorously, like any other watermelon. However, they must be planted with regular diploid watermelons for pollination.

Because the seeds in a triploid watermelon are infertile, the melon adapts by adjusting to the new conditions. The inner, red fruit is often firmer than a seeded watermelon because it does not soften to cushion developing seeds. For this reason, it can also be kept longer on the grocery store shelf. 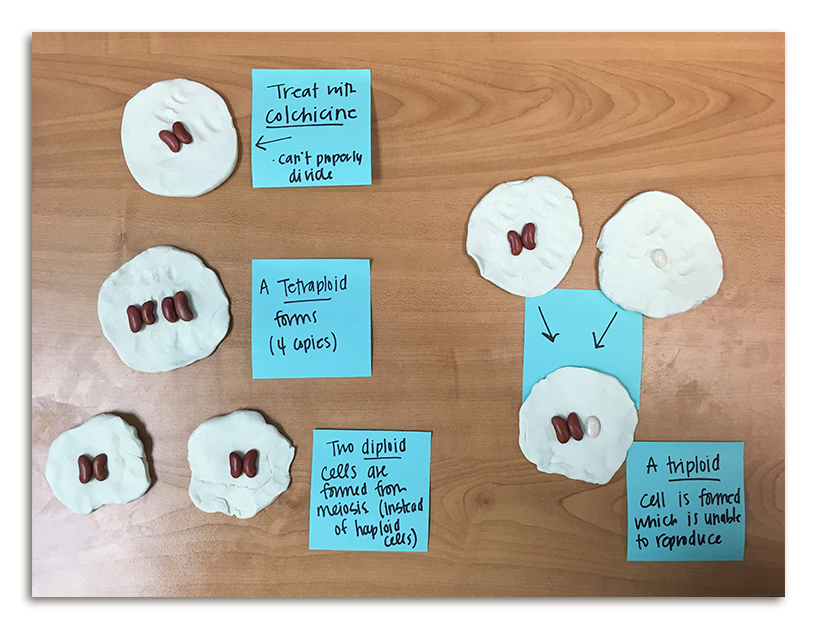 At the conclusion of this activity, review and summarize the following key concepts:

This lesson was adapted from the lesson, Melon Meiosis, written by Oklahoma Agriculture in the Classroom

National Center for Agricultural Literacy and Utah Agriculture in the Classroom

Living cells are composed of chemical elements and molecules that form macromolecules. The macromolecules in a cell function to carry out important reactions that allow cycling of matter and flow of energy within and between organisms. All organisms are made of one or more cells. The structure and function of a cell determines the cellâs role in an organism. Multicellular organisms have systems of tissues and organs that work together to meet the needs of the whole organism. Cells grow, divide, and function in order to accomplish essential life processes. Feedback systems help organisms maintain homeostasis.