In this lesson students will learn the chemistry and composition of milk, identify the difference between a monosaccharide and disaccharide, and carry out a laboratory activity testing the effect of the enzyme lactase on various milks. Grades 9-12

disaccharide: a sugar made of two molecules (e.g., sucrose, maltose)

monosaccharide: a simple sugar molecule that cannot be broken down further into smaller molecules

Milk, From the Dairy Farm to You
By definition, the word "milk" is an opaque white fluid rich in fat and protein secreted by female mammals for the nourishment of their young.  Milk accounts for the making of the foods found in the dairy food group. Milk, cheese, yogurt, ice cream, butter and other dairy products provide abundant calcium and protein to our diets as well as other important vitamins and minerals. In the United States the majority of all fluid milk and other dairy products come from milk produced by a cow.  Although all mammals produce milk after giving birth, cattle are the primary source of milk for our food supply due to their efficiency in producing it.

The two most common breeds of cattle on a dairy farm are the black and white holstein and the brown-colored Jersey.  On average, a female calf, known as a heifer will be raised on a farm and give birth to her first calf around two years of age.  Once the heifer gives birth, she is now known as a cow and enters the milking herd.  Milk cows are fed a ration that is specially formulated to meet their nutritional needs.  Cows are typically milked two to three times daily for an average of 12-18 months.  In time, the cow is bred again and eventually stops producing milk. This is known as a dry period which allows the animal to rest prior to giving birth to her next calf and beginning the cycle of milk production again.

On average, dairy cows produce six to eight gallons of milk each day.  Large trucks with refrigerated milk tanks pick up the milk each day and deliver it to a processing plant where it is pasteurized and homogenized.  Pasteurization is a process where the milk is heated for a short amount of time to kill any harmful bacteria in the milk.  Homogenization sheers the fat molecules in the milk to prevent the cream from separating from the milk and giving it a consistent texture.  The milk is then packaged or processed into cheese, ice cream, yogurt, or other healthy dairy products.

Chemical and Physical Properties of Milk

What exactly is milk? The physical composition of milk can be broken down as water, lactose, fat, protein, and minerals.  Milk composition does vary among species (cow, goat, sheep), breed (Holstein or Jersey), the animal's feed, and the stage of lactation. However, milk typically contains 87.7% water, 4.9% lactose, 3.4% fat, 3.3% protein, and 0.7% minerals.

Enzymes are substances produced by the body to perform a chemical reaction. Enzymes are used to chemically break down the food we eat and to allow our bodies to use the nutrients found in foods. Lactase is an enzyme produced by the small intestine that binds to lactose and breaks the bond between galactose and glucose, the two sugars found in lactose. 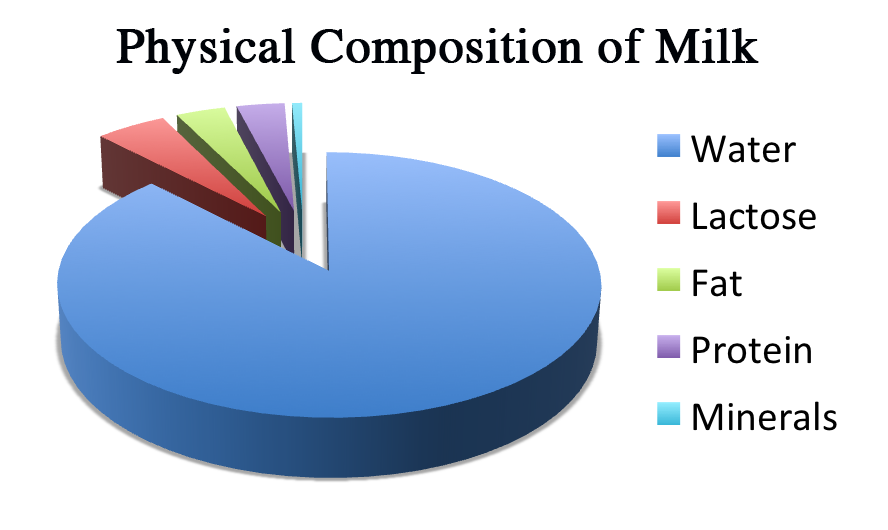 Most people and animals make lactase as infants. This allows them to process mother’s milk. However, some people's bodies stop producing the enzyme leading to the condition of lactose intolerance. In rare cases infants can develop lactose intolerance, but usually it develops during the teen or adult years.

People who are lactose intolerant tend to avoid dairy products and this can be troublesome since these foods are high in proteins and essential nutrients like vitamins A and D, magnesium, calcium, riboflavin, and potassium.

One solution for lactose intolerance is to take the enzyme, lactase in liquid or pill form before consuming dairy products.  You may also have seen milk and dairy foods labeled as, "Lactose Free."  These milk and dairy products were produced on a dairy farm without alterations of any kind.  The difference in Lactose Free milk comes in the processing.  Lactose free milk is mixed with the enzyme, lactase at the processing plant.  As a result, the lactose is broken down into the digestible glucose and galactose monosaccharides allowing people with lactose intolerance the ability to consume dairy products without taking medications containing lactase.

National Agriculture in the Classroom