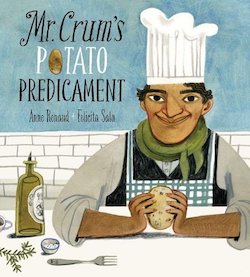 When Filbert P. Horsefeathers walks into George Crum's restaurant, he tells the waitress, "I have a hankering for a heaping helping of potatoes." Fine cook that he is, George prepares a serving of his most scrumptious, succulent and sublime potato wedges, only to have Filbert send them back. "Too thick, " he says. So, George makes thinner wedges. But his picky customer sends them back until they are crackling and then showers with salt. At last Filbert is satisfied, proclaiming, "Perfection!" Which they are. Because quite by accident, George Crum has invented potato chips! This fictional picture book tale is based on a real man named George Crum, a cook in Saratoga Springs, New York, in the 1850s, who is purported to have created the first potato chip in response to a demanding customer.