Students will simulate the process of gene splicing, understand the application of transgenic organisms in agriculture, and see how goats can be used for the production of goods other than meat and milk through the use of biotechnology. Grades 9-12

double helix : the structure of a DNA molecule

dragline silk : the silk that spiders use to catch themselves when they fall

gene splicing : a technique used to join segments of DNA to form a new genetic combination

kevlar: a synthetic fiber that is used as a reinforcing agent in materials such as bullet-proof vests and parachutes because of its tensile strength

nitrogenous base: nitrogen-containing bases (adenine, guanine, thymine, cytosine) that attach to the backbone of DNA

spider goat: a goat that contains spider genes and produces the protein for spider silk during lactation

Students should have a prior knowledge and understanding of the structure and function of DNA. It is helpful for students to understand the double-helix shape of DNA as well as the four nitrogenous bases.

When working on a computer, often times Ctrl+C and Ctrl+V are used to “copy and paste.” This same concept of copying and pasting happens during a process called gene splicing. Gene splicing is when a section from one DNA strand is copied and spliced (pasted) into another DNA strand. Gene splicing forms recombinant DNA. Gene splicing is used in plants and animals to create a transgenic organism.

When animals can produce a useful product for humans, they are often raised on farms for the production of these goods. For example, milk, meat, and eggs provide valuable nutrients to our diets. Cattle, pigs, sheep, goats, and poultry are all raised on farms for the production of these goods. Spider silk is a valuable resource. Dragline silk from spiders is 100 times stronger than natural ligaments, 10 times stronger than natural tendons, more elastic than nylon, and can be used to replace kevlar. Therefore, spider silk is considered an ideal material because of its versatile use. However, while it is useful, there are limitations in realistically producing it. First, spiders cannot produce large quantities of spider silk and second, they are nearly impossible to “farm” because of their cannibalistic nature. As an alternative, scientists have turned to biotechnology to find an alternative method of producing spider silk. How can this be accomplished? Within the genome of a spider is the DNA code for the protein responsible for producing silk. If a scientist could find a way to transfer the spider’s silk gene to another species, perhaps they could produce spider silk in another way.

Goats are common livestock animals found on farms. They produce meat, milk, and occasionally a fiber called mohair. While cow’s milk is most common in the United States for human consumption, goat milk has many merits. It is closer in structure to human milk and can sometimes be consumed by people who have allergic reactions to cow’s milk. Goats produce 6-12 pounds of milk per day. In comparison to dairy cows, goats are smaller and easier to manage. For these reasons, goats were chosen for this particular experiment. Scientists set out to try to splice the silk making gene from a spider into the genome of a goat.

Under the direction of Randy Lewis at Utah State University (originally at University of Wyoming), regular dairy goats are being used to produce spider silk. This is done by copying the silk-making gene in a spider’s DNA and splicing it into a goat’s DNA. This gene splicing gives goats the ability to produce the spider silk protein in their milk. These spider goats are then milked (just like any other milk goat) and the spider silk protein is extracted from the milk. The extraction takes place by freezing the milk and separating the fat. The thawed milk is then sifted, and the remaining fat molecules separate from the smaller silk proteins. In addition to goats, Utah State University has also started gene splicing with other transgenic organisms including alfalfa hay and silk worms.

*If you use interactive notebooks, this gene splicing activity can be inserted into students’ notebooks and then folded to open and close. 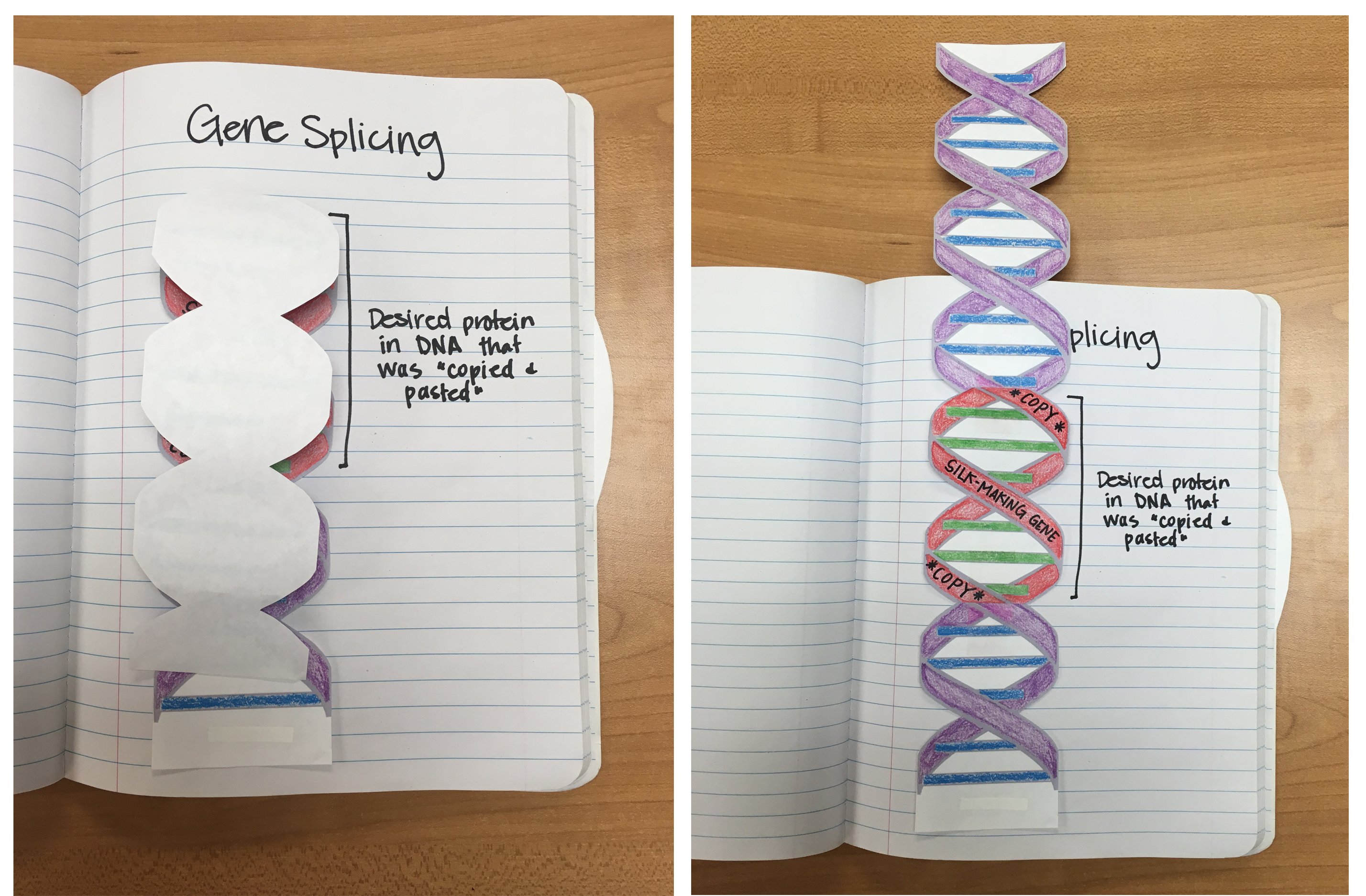 After conducting these activities, review the following key concepts: