More Than One Grain of Rice

Students investigate the cultivation and identify the parts of rice by reading One Grain of Rice by Demi and removing the hull, bran, and germ from grains of rice. Grades 3-5 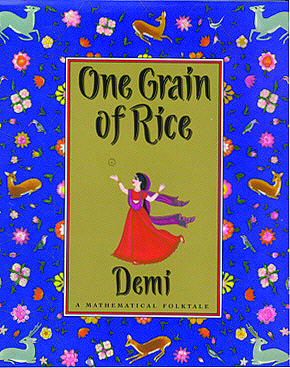 Activity 1: One Grain of Rice

brown rice: whole grain rice from which the inedible hull has been removed, but which still has the germ and outer layers of bran

regions: areas of Earthâs surface that have unifying physical and/or human characteristics

rough rice: unprocessed rice still in the hull as it comes from the field, also known as paddy rice

staple food: a food that is eaten regularly and is a dominant part of the diet, supplying a major proportion of energy and nutrient needs

white rice: rice from which the inedible hull, germ, and outer layers of bran have been removed

Rice is the primary staple food for more than half of the people in the world, and it is grown on every continent except Antarctica. Most of the world’s rice is grown and eaten in Asia. China, India, and Indonesia are three of the top rice-producing countries in the world. Rice is also an important crop in Latin America and Africa, where Argentina, Brazil, Colombia, Madagascar, Nigeria, and Tanzania are important rice-producing countries.1

The United States has the world’s highest yielding rice farms due to the wide availability of irrigation and advanced technology. Rice fields are leveled using computerized, laser-guided land-leveling equipment to make sure the flooded field or “rice paddy” is perfectly flat. Seeds are planted in early spring to an exact depth by grain drills pulled behind a tractor or cast over dry or flooded fields by airplane. Fields are flooded between March and May, depending on the region. Flooded rice fields provide important wetland habitat for hundreds of species of birds, mammals, and amphibians. Recirculating irrigation systems have allowed farmers to maximize yields and reduce the amount of water required by over one-third in the last 30 years.4 Between September and November, the rice is mature and ready for harvest. The fields are drained, and then the rice is harvested using combines. The rice heads are removed, and the rice stem or straw is left. The straw is cut and baled later, just like wheat, barley, and oat straw. The rice, called rough rice at this point, is then transported to a dryer where moisture is slowly removed from each grain. Finally, the rough rice is sent to a mill for processing.

The rough rice is first milled using a rice huller to remove the chaff (the outer husks or hulls of the grain); this creates brown rice. This process may be continued, removing the germ and the brown outer layers, which are called bran, to create white rice. Rice, both brown and white, is grouped by size: long, medium, or short grain. Short grain rice tends to be sticky, while long grain rice remains separate and is light and fluffy after cooking. Rice is used in breakfast cereals, baby food, rice cakes, beverages, and as table rice.

It is believed that rice was first cultivated in ancient Asia and from there spread to Africa and Europe. Rice was later introduced to South and North America and Australia with the advent of sea voyage. Rice farming in California began in the early 1900s, mainly in response to the increasing Chinese population during the Gold Rush.

Rice is the world’s second or third largest crop, behind maize (corn) and sometimes wheat.2 Rice cultivation is well suited to countries and regions with low labor costs and high rainfall, as it is very labor-intensive to cultivate without expensive machinery and requires plenty of water. Rice is a nutritious, affordable source of carbohydrates and is packed with vitamins and minerals. It includes thiamin, riboflavin, niacin, phosphorus, iron, and potassium, and is an excellent source of amino acids. Only a trace amount of fat is found in either brown or white rice. Brown rice is a good source of fiber and is part of a solid foundation for a healthy diet.

Activity 1: One Grain of Rice

Activity 3: Rice Processing
In order for harvested rice to be edible, the hulls must be removed. White rice is obtained by milling further to remove the rice bran (see Rice Examples page). White rice cooks more quickly and has a better shelf life than brown rice, but the nutritional value is reduced by removing the germ and bran.

Activity 3 was adapted from the California Foundation for Agriculture in the Classroom commodity fact sheet and activity sheet Rice.