This lesson introduces students to food safety, the 4 Cs of Food Safety, the Farm-to-Table Continuum, who’s responsible for keeping our food safe, and the link between food safety and other content areas. Students will also be challenged to hypothesize about where most bacteria are found and develop awareness that bacteria are everywhere and that various surfaces might have different levels of organisms. Grades 6-8

Food safety is everyone’s responsibility — everyone involved in growing, processing, transporting, and handling our food along all the points in our complex food production and distribution system. This responsibility includes all of us as we purchase, prepare, and eat our food. Students need to understand that food safety is a very serious issue that affects the well-being of every individual. So, because everyone must eat, we’re all at risk of becoming ill if food becomes contaminated.

Food Safety and the Battle with Bacteria
The United States has one of the safest food supplies in the world, but there’s always room for improvement. The battle to prevent foodborne illness is waged every day because bacteria are everywhere. Food safety has to do with controlling bacteria. And since everyone eats, we all share the responsibility for keeping our food free from harmful bacteria.

Electron Microscope
An electron microscope uses electrons instead of visible light to produce magnified images. It can magnify bacteria a million times their normal size.

Where Bacteria Come From and How They Grow
Bacteria are found everywhere, and under the right conditions, they can multiply fast! Each bacterium contains all the genetic information needed to make copies of itself. Bacteria multiply through binary fission, a process in which the cell’s DNA doubles, the cell splits, and two independent cells are formed. Under the right conditions, a single bacterium will double with each division — 2 become 4, 4 become 8, etc. A single cell can turn into millions of cells in a few hours and billions of cells within one day!

This rapid growth is not usually a problem with good bacteria; however, when it occurs with “bad” bacteria (a.k.a. pathogens), it is “bad” news. As pathogens multiply, some give off harmful toxins or become infectious. If pathogens get into our food and multiply, people can get sick.

The 12 Most Unwanted Bacteria

How the 4 Cs of Food Safety Control Bacteria
If bacteria can grow so rapidly under the right conditions, then how do we control them? It’s simple: 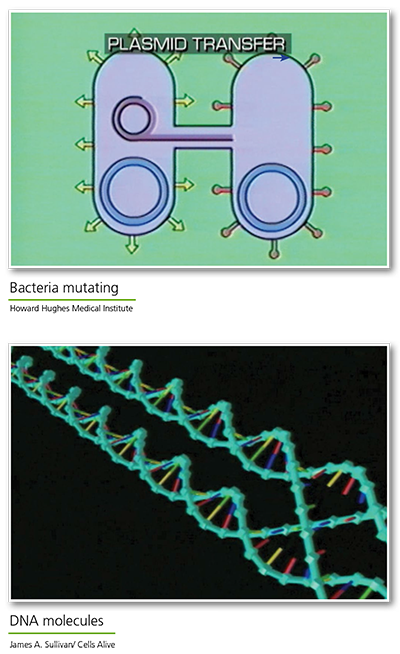 Emerging Pathogens
Not only can bacteria multiply quickly, but they can also mutate (adapt and evolve), a process that results in changes to their genetic code. These changes happen very slowly and can make the bacteria better able to survive. These changes can also change harmless bacteria into harmful bacteria, which often possess a new genetic characteristic like antibiotic resistance.

How Scientists Can Tell Good Bacteria from Harmful Bacteria
DNA (deoxyribonucleic acid) is the “genetic blueprint” for all living things. A DNA molecule looks like a double helix that’s shaped like a long ladder twisted into a spiral. The ends are joined to form a continuous loop, like a rubber band.

DNA contains the information that gives living organisms their traits or characteristics. In people, it determines traits like physical features, behaviors, and even whether we’re right or left-handed. In bacteria, the DNA molecule encodes the information that enables bacteria to grow, reproduce, and cause illness.

Scientists use DNA “fingerprinting” to identify similar groups of bacteria. DNA is treated so that it exhibits its own special pattern. When there is an outbreak of foodborne illness, epidemiologists (scientists who track down the causes of diseases and find ways to control them) try to determine the source of bacteria in foods by examining the pathogen’s DNA “fingerprint.” Then they see if it matches up to “fingerprints” (patterns) from other samples.

Food Safety Connection
Food safety is everyone’s responsibility — everyone involved in growing, processing, transporting, and handling our food along all the points in our complex food production and distribution system. This responsibility includes all of us as we purchase, prepare, and eat our food. Students need to understand that food safety is a very serious issue that affects the well-being of every individual. So, because everyone must eat, we’re all at risk of becoming ill if food becomes contaminated.

After discussing and reviewing these questions, summarize the lesson to help students understand that it’s everyone’s responsibility to control the spread of bacteria — the farmer, the food processor, the person who transports our food, people who work in supermarkets and restaurants, and consumers when they take the food home.