Grow it Now, Drive it Later?

Students will discover potential careers in agriculture with a focus on the growing field of biofuel development. Grades 6-8

algaculture: farming a species of algae

algae: a simple nonflowering plant of a large group that includes the seaweeds and many single-celled forms; contain chlorophyll but lack true stems, roots, leaves, and vascular tissue

biodiesel: a fuel made from vegetable oils or animal fats

ethanol: a fuel produced by fermentation of products high in starch, such as corn

petroleum: a naturally occurring liquid found in geological formations beneath the earth's surface which is often refined into fuel

Plants take in light energy from the sun and turn it into sugars. They store the sugars in their roots, leaves, stems, flowers, and seeds. The energy in the sugars makes them grow. When people or animals eat food made from plants like soybeans, corn, and wheat, the sugars (or carbohydrates) give them energy. In addition to sugars, the seeds of plants also contain protein and fats (or oils). 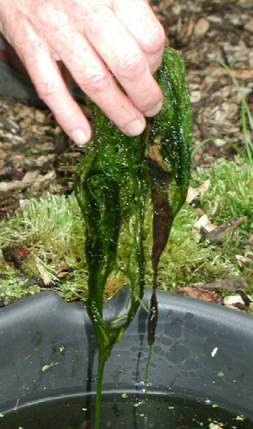 Soybeans belong to the legume family—plants that produce beans in pods. Legumes also take in nitrogen from the air and release it into the soil. Nitrogen is important for good soil and healthy crops. One soybean plant produces about 70 soybean pods with two to four beans in each pod. The seeds are about the size of peas and may be yellow, green, brown, black, or speckled.

Soybeans were first domesticated in Asia, where farmers have grown them for more than 5,000 years. Today soybeans are still an important crop in China. They are used for food, fertilizer, animal feed, medicines, and oils.

Soybeans were first grown in the United States in the early 1800s. They were used as a source of food for humans and farm animals. During the Civil War, coffee beans were hard to get, so soybeans were roasted and used to make a coffee substitute. They were called coffee berries.

In 1904 George Washington Carver began studying soybeans. He discovered that soybeans are a valuable source of oil as well as protein. A 60-pound bushel of soybeans produces 48 pounds of soy protein, 11 pounds of soy oil, and 1 pound of hulls (the coatings of the beans). Henry Ford used soy oil to make plastic parts for his cars.

Farmers harvest the soybeans, which can be eaten fresh in their pods, dried and roasted, or broken down into different forms. Most soybeans are harvested and removed from their pods by a machine called a combine and then sent to a processing plant where they are crushed, rolled into flakes, and mixed with a solvent to separate the oil and protein. Soybean oil and protein can be made into many kinds of animal and human foods, as well as products such as crayons, paint, glue, and plastics.

Soybeans can be blended (mixed) with regular diesel, which is a petroleum fuel. Many cities and school districts use a blend of 20 percent biodiesel and 80 percent diesel in their buses. This is called a B20 blend. Using B20 reduces pollution from the buses, making the air cleaner.

Most trucks, buses, and tractors in the United States use diesel fuel. Regular diesel fuel is made from petroleum, a nonrenewable energy source. Petroleum is a fossil fuel; it takes millions of years to form under the ground, so we can’t make more in a short time. When petroleum fuels are burned in vehicle engines, they can pollute the air. If they spill onto the soil or into the water, they can damage the environment for a long time. Petroleum fuels are toxic and should be handled carefully.

Biodiesel is a fuel made from vegetable oils or animal fats. It is usually made from soybean oil, but it can also be made from corn oil or used restaurant grease and oil. If it is made from restaurant oil, it can smell like French fries. Since biodiesel is made from plant and animal oils, it is a renewable fuel. We can grow more plants in a short time to make more biodiesel. However, with the demand for food and land resources increasing, some scientists are looking at a “plant-like” organism—algae—as a possible fuel source. High oil prices and the competing demands between foods and other biofuel sources have ignited interest in algaculture (farming algae) for making vegetable oil, biodiesel, and other biofuels using land that is not suitable for agriculture. 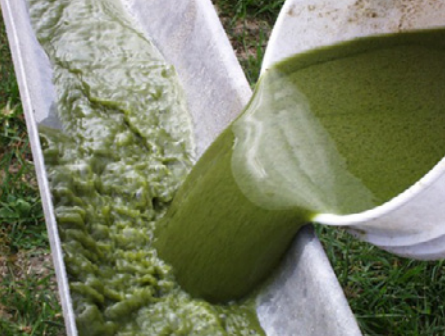 Algae are not plants. They lack the structures that characterize land plants, such as leaves and roots. Nearly all algae have photosynthetic capability, and algae cells contain both sugars (carbohydrates) and oils (fats). Scientists are looking at efficient ways to grow algae for biofuels. Algae don’t need fertile soil and can grow or colonize in wastewater. Several types of algae grow well in salt water. Algae use sunlight and water and produce oil in their cells 50 times faster than regular crops. When this oil is extracted for biofuel, it can be used in a car and can be used to generate electricity. Among algal fuels’ attractive characteristics: they do not affect fresh water resources, they can be produced using ocean and wastewater, and they are biodegradable and relatively harmless to the environment if spilled.

How do you get oil out of soybeans? Soybeans are crushed and then a solvent called hexane is used to extract oil from the seed. If you crush soybeans in a mill and then boil the meal, the oil from the seeds will float on the surface of the water. How do you get the oil out of algae? It is similar to soybean oil extraction; you remove the oil from dried algae chemically with hexane or mechanically with an expeller press or ultrasound. How much energy is in oil? Conduct the following activity to measure the calories in vegetable oil.

How do you convert ml to grams?

One gram of water is always equal to 1 ml because that is its weight. For other substances, this is not necessarily true because different substances have different densities. For example, 1 ml of iron weighs about 7 grams; it is more dense than water.