Students label the parts of a peanut plant on a diagram, follow step-by-step instructions to plant a peanut, and use a chart to record the growth of peanut plants. Grades 3-5

peanut: a plant in the pea family that bears the peanut, which develops in pods that ripen underground and are widely cultivated, especially in the southern US

The History of the Peanut

The peanut plant probably originated in Brazil or Peru, although no fossil records exist to prove this. Peanuts were grown as far north as Mexico by the time the Spanish began their exploration of the New World. The explorers took peanuts back to Spain, where they are still grown today. From Spain, traders and explorers took peanuts to Africa and Asia. Africans were the first people to introduce peanuts to North America. Eventually, peanuts were planted throughout the southern United States. Today, peanuts are one of America’s favorite foods.

The “Father of the Peanut”

George Washington Carver began his research into peanuts in 1903 at Tuskeegee Institute in Alabama. The talented botanist recognized the value of peanuts as a cash crop. He proposed to farmers that peanuts be planted as a rotational crop in their fields. Many farmers found this procedure especially valuable in the southeastern cotton growing areas when insects, called boll weevils, threatened the cotton crops. By listening to the great scientist, peanut production flourished. States growing peanuts today include Georgia, Texas, Alabama, North Carolina, Oklahoma, Virginia, Florida, South Carolina, and New Mexico. Georgia grows more peanuts than any other state. Carver was able to discover over 300 uses for the peanut, including shaving cream, leather dye, coffee, ink, and shoe polish.

How the peanut plant grows 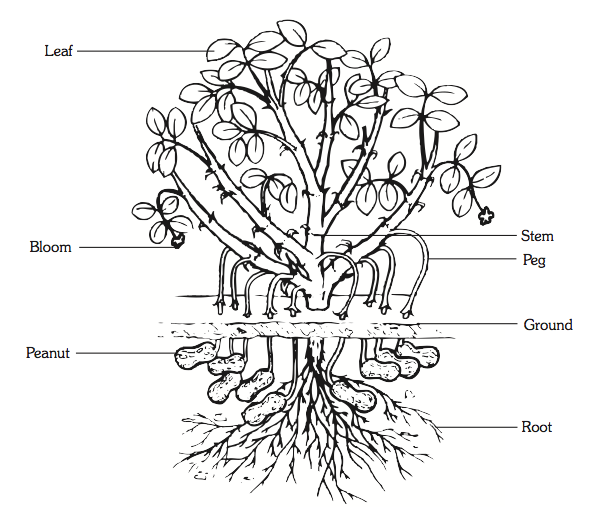 Unlike other nuts, peanuts do not grow on trees. The peanut is unusual because it grows on a plant that flowers above the ground, but the actual fruits (the peanuts) grow underground. A farmer usually plants his peanuts in April or May. Once planted, peanut seeds grow into a green plant with oval-shaped leaves that reaches about 18 inches in height. From planting to harvesting, the growing cycle of a peanut takes four to five months.

Although peanuts come in many varieties, there are four basic market types: runner, Virginia, Spanish, and Valencia. Each of the peanut types is distinctive in size, flavor, and nutritional value. Runner peanuts are known for their consistent, medium kernel size. Runner peanuts are mainly used to make peanut butter. They are also used in candy and snacks. Virginia peanuts are known for their extra large kernel size. They account for most of the peanuts roasted and processed in the shell. When they are shelled, the larger kernels are sold as snack peanuts. Peanuts known for their smaller kernels and reddish-brown skins are called Spanish peanuts. They are used in peanut butter, snack peanuts, and peanut candies. The Spanish peanuts also have a high oil content, which allows the oil to be crushed out and extracted for use in cooking. Valencia peanuts are known for having three or more small kernels to a shell and for their bright red skins. Valencia peanuts are very sweet and are usually roasted and sold in the shell.

Where do Peanuts Grow?

Eleven states produce almost all of the US peanut crop. Georgia grows nearly half of all US peanuts, followed by Florida, Alabama, Texas, North Carolina, South Carolina, Mississippi, Virginia, Oklahoma, Arkansas, and New Mexico. The peanut-producing states are grouped into three regions. The Southeast region produces the most peanuts and includes Alabama, Georgia, Florida, and Mississippi. Second in production is the Virginia-Carolina region, which includes North Carolina, South Carolina, and Virginia. Third is the Southwest region, which includes Texas, Oklahoma, New Mexico, and Arkansas. In 2013, 72% of all the peanuts grown in the United States were grown in the Southeast region, 15% were grown in the Virginia-Carolina region, and the remaining 13% were grown in the Southwest region.

Dr. John Harvey Kellogg applied for the first patent for peanut butter in 1895. The world was introduced to peanut butter at the Universal Exposition in 1904 in St. Louis. The peanut treat sold for about six cents per pint. Both peanuts and peanut butter are protein powerhouses, providing 12 percent of the recommended daily allowance per serving. About one ounce of peanuts or two tablespoons of peanut butter equal one serving. Peanuts are also a good source of fiber. Fiber reduces the risk of some kinds of cancer and helps the digestive system eliminate waste from the body. In addition, peanuts contain mostly unsaturated fat, which is known as the “good fat.”

The occurrence of peanut allergies in the United States has grown significantly.  Some peanut allergies are very serious health concerns. Prior to completing any of these activities, be aware of any allergies in your classroom or school and what measures should be taken to avoid allergic reactions.

Questions for Investigation and Assessment: