Seedling Preparation: 5-6 days in advance, gather the following materials for each group of 4 students

Diffusion Demonstration: For each group of 4 students

Celery Demonstration: For each group of 4 students

adenosine triphosphate (ATP): a compound that has three phosphate groups and is used by cells to store energy

lignin: a non-carbohydrate polymer that binds cellulose fibers together. It adds strength and stiffness to plant cell walls

phloem: a portion of the vascular system in plants, consisting of living cells arranged into tubes that transport sugar and other organic nutrients throughout the plant

xylem: the specialized cells of plants that transport water and nutrients from the roots to the leaves

Plants use their root systems for structural support, stability and nourishment. If you have ever seen a tree toppled by high winds, you have some idea of why trees are so stable. Even so, much of the root system remains in the soil, hidden from view. The primary function of the root system is to absorb water and nutrients from the soil. To do this, the root system is ever changing over the course of the plant’s life, capable of growing year-round, provided that conditions for growth are met and there isn’t competition from the plant’s top system. Roots also may serve as storage organs for starch or sugars. Carrots, beets, radishes, turnips, and potatoes are examples of storage roots. 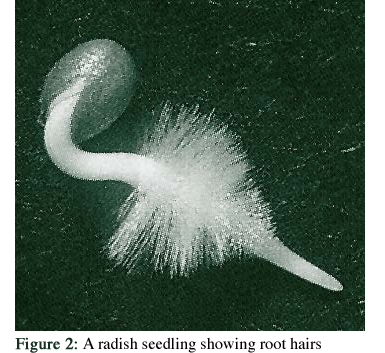 The growth of roots is similar to the growth of shoots. However, there are important differences. In general, the more extensive a root system is, the more water and nutrients it can absorb. If you examine a root using a magnifying glass, you will see a large number of delicate, white root hairs growing out from the surface of the root (see Figure 2). This network of root hairs greatly increases the surface area of the root available to contact and absorb water. A single rye plant 60 centimeters tall is estimated to have a root system with a total length of 480 kilometers. Its surface area is more than 600 square meters—twice that of a tennis court!

The tip of an actively growing root is called the root cap (see Figure 3). The root cap produces a slimy secretion called mucilage that helps lubricate the root as it pushes its way through the soil. Just behind the root cap is the zone of active cell division, and behind it is a zone of cell elongation. The cells of the elongation zone grow by taking in water and swelling. The root cells contain salt and sugars. Because the root cells contain more solutes than the water in the soil, water flows into the cells by diffusion. This causes the cells to elongate, forcing the root deeper into the soil. Behind the elongation zone is the zone of cell differentiation. The cells in this area give rise to the cells of the vascular system, which transport water up the stem and sugars down from the leaves. 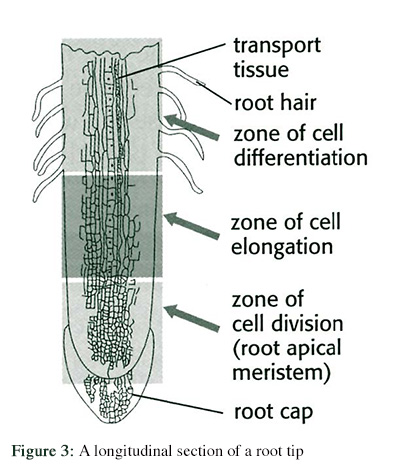 Roots may stop growing during the winter, not because they have become dormant like the buds at the top of the plant, but rather because the temperature is too cool to support growth. In order for roots to grow, they must have adequate moisture and temperature. Many people are under the misconception that roots grow in search of water. This isn’t the case. Roots can only grow where the conditions are suitable for growth. This means that roots grow where water is already present.

Water is absorbed by the root hairs and brings along with it any chemicals, including nutrients that are dissolved in it. Most nutrients are present in higher concentration in the root hairs as compared with the soil water. Active transport is used to move the nutrients deeper into the root system until they reach cells of the vascular system. The importance of active transport can be demonstrated by exposing plants to a chemical that interferes with cellular respiration. Without a supply of ATP (the cell’s energy molecule) produced through respiration, the rate of nutrient movement slows greatly.

Although plants don’t have a circulatory system like humans, they still must transport material from one part of the organism to another. The plant stem contains a vascular system that connects the leaves to the roots. The plant’s vascular system is composed of xylem tissue that transports water from the roots to the rest of the plant and phloem tissue that transports sugars produced in the leaves to the non photosynthetic parts of the plant (see Figure 4). The xylem is composed of dead cells that form long, empty tubes. Some tubes are wide, and others are narrow. The cell walls within the tubes are either missing or contain a series of holes that permits the passage of water. The cells that gave rise to the xylem lay down thick cell walls that contain a polymer called lignin. Lignin lends strength to the xylem and prevents it from collapsing under pressure. 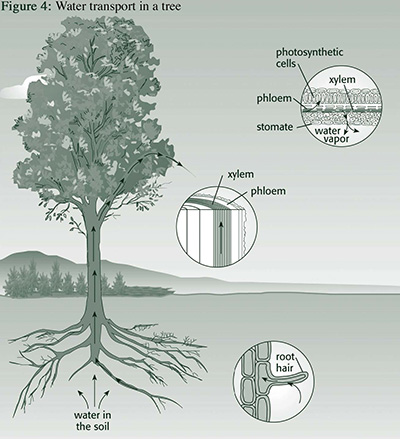 The capability of xylem tissue is truly amazing. In the case of the tallest trees, water must be transported from the roots up, over 100 meters and against gravity, to the leaves. Water is thought to move through the xylem by a process known as cohesion-tension. According to this view, water can be pulled upward provided that the diameter of the tube is sufficiently small and that the column of water is continuous, that is, without air bubbles. A further requirement is that the tube be made of a material to which water molecules will adhere. Within each xylem tube, the water molecules are attracted to adjacent water molecules, forming an unbroken chain. The plant loses water through evaporation from its leaves by a process called transpiration. As water is lost, a negative pressure or tension is created that pulls water up from the xylem. Transpiration is the process that drives the transport of water from the roots up through the stems to the leaves.

While water is moving up the plant, sugars and amino acids must move from the leaves downward to the non photosynthetic parts of the plant. Phloem tissue is composed of tubes made from living cells called sieve cells. Holes at the ends of their cell walls form sieve plates. The cytoplasm of one sieve cell connects with the cytoplasm of adjacent sieve cells through these holes, forming a continuous cell-to-cell sieve tube. As the sieve cells mature, they lose their nuclei and other organelles. Beside each sieve cell is a smaller companion cell that has a nucleus. The companion cells are thought to regulate the activity of the sieve cells.

Experiments have demonstrated that this movement occurs at a rate that is thousands of times faster than could be achieved by diffusion. Sugars are thought to move through the phloem by a process called pressure flow. According to this view, water and dissolved sugars flow through sieve tubes from areas of higher pressure to ones of lower pressure. Sugars made in the leaves are transported into the phloem by active transport. The high concentration of sugar causes water to flow into the phloem cells, increasing what is called the turgor pressure within the cell. This high turgor pressure forces the sugar-water solution into the adjacent phloem cell, increasing its turgor pressure. This process repeats,moving from cell to cell until the solution reaches a cell where it will be used. Once at its destination, the sugar is removed from the phloem by active transport. Water, too, is removed from the phloem cell, regenerating the lower turgor pressure needed to keep the flow moving.

Activity 1: Seedling preparation. In Step 4, students are asked to observe the root systems of young seedlings. For this activity, any type of seeds may be used so long as the roots have grown about 1 or 2 cm. Pinto bean seeds are easy to obtain and work well. To germinate the seeds, place several seeds in a row along one side of a paper towel as shown in Figure 3.2. Carefully roll up the paper towel from bottom to top. Place the rolled paper towel into a glass of water so that the seeds are at the top and out of the water glass (Figure 3.2). Water will wick up through the paper towel and keep the seeds moist. Prepare enough seedlings so that each group of 4 students will have a seed to observe. Assume that just 1/2 of the seeds you prepare will germinate. Set the glasses of seedlings in a location where they will not be disturbed. The seeds will need approximately 5 to 6 days for the roots to grow enough for observation. During the germination period, be careful to replace any water that is lost through evaporation. 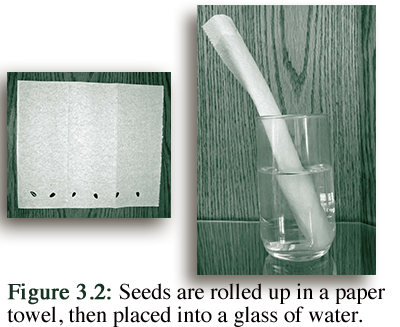 Activity 2: Celery demonstration. Use a sharp knife to cut celery stalks into pieces approximately 2 inches long. Make sure that the cut surfaces are flat and will allow the celery to rest upright when placed into the paper cups. 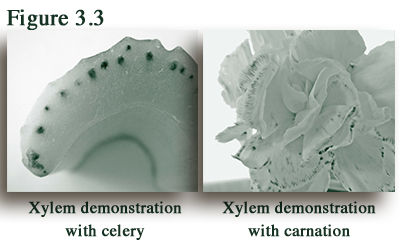 Activity 1: From Soil to Roots

Teacher note: Diffusion and active transport both play roles in moving nutrients from the soil into the plant roots. It is not necessary that middle school students be familiar with the details of these processes. The important things for students to know are

Assessment: Pass out to each student 1 copy of Master 3.1, What Do You Know about Roots? Instruct students to write on their copies of Master 3.1 why each statement is true or false. Students should include specific evidence from the lesson that supports their conclusions.

Activity 2: From Roots to the Plant