Soil Separation: For the class:

Dry Soil Investigation: For a group of 4 students

Soil and Air Space: For a group of 4 students

Soil and Water: For a group of 4 students

Teacher Note: Try to obtain coarse sand such as that used for home improvement products. Clean, fine sand may not allow water to pass as readily as most sands found in soils. The preparations described in this section can be carried out by students if desired.

loam: ideal garden soil that has a well-balanced mixture of sand, silt, and clay

As with agriculture, we generally don’t think much about the soil. In fact, “soil” has a negative connotation. We call it dirt and wash it off our clothes and our bodies. In reality, the soil is essential to our survival and that of nearly every organism on Earth. Our planet is mostly made of rock with an iron-nickel core. Plants and animals, including us, occupy a thin veneer on its surface. Our existence is possible because of a thin layer of soil that comes between the planet’s rocky interior and us.

Soils are slowly produced by the weathering of rock. Constant exposure to wind and rain cause the rocky crust to slowly break down into smaller particles. It can take centuries to produce fertile topsoil. As rainwater seeps into cracks, temperature extremes cause the water to freeze. The rock expands, contracts, and fractures. These weathering actions are helped along by organisms that live on and in the soil. Soils are composed of inorganic material derived from rock and organic material derived from living and dead organisms. Both are important to support plant growth. Some scientists believe that without life, soils are just dirt. 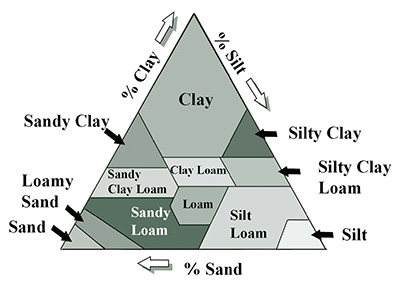 As weathering breaks down inorganic material, particles of various sizes are produced. Soil texture refers to the relative proportions of different-sized particles found in the soil. Scientists classify soil particles into three categories. The smallest particles, which measure less than 0.002 millimeters, are called clay. Clay is important in holding nutrients. Clay particles form plate like structures that act like magnets, holding nutrients until they are displaced by another element, absorbed by a plant root, eaten by a soil microbe, or chemically absorbed into the soil. The next largest particles are called silt. Silt particles range in size from 0.002 millimeters to 0.06 millimeters. Sand refers to the largest particles. Sand grains range in size from 0.06 millimeters to 2 millimeters. Soils vary in their proportions of clay, silt, and sand. Soil scientists classify different soil types using the soil triangle. Each side of the soil triangle represents the amount of a soil component, clay, silt, or sand. The relative amounts of these three particle sizes intersect within the triangle and determine to what type of soil those proportions correspond.

The ability of a soil to accept and retain water is largely determined by the relative amounts of clay, silt, and sand present. Porosity refers to spaces in the soil that can hold either air or water. Permeability is defined as the rate at which water can travel through soil. Table 8 lists properties of particle size that relate to soils’ interactions with water. Soils with desirable properties for farming are called loams. Loamy soils typically contain about 50 percent air space, which allows root systems to “breathe” (i.e. obtain O2 for respiration). The solid half of soils is about 90 percent minerals and10 percent organic material. Usually, loamy soils have names that more accurately reflect their composition, such as clay loam or silt loam. Although the organic fraction of most soils is small in volume compared to the mineral fraction, it plays an important role in supporting plant growth. The organic material is composed of living organisms, plant roots, and plant and animal residue. A single gram of healthy topsoil may contain 100 nematodes (small roundworms),1million fungi, and 1 billion bacteria. Present in smaller numbers may be earthworms and a wide variety of insects. Organic material contains a significant amount of nutrients, and it, together with plant roots, help

The soil is a “bank” for nutrients that are taken up by plants, and these nutrients must be replenished for continued plant growth. Before the advent of modern agriculture, farmers relied solely upon tillage to break down existing organic material and release existing soil nutrients. This practice is still used in many less developed countries.

Soil separation. In Step 6, students are asked to observe three different soil types (potting soil, local soil, and sand) that have been mixed with water and allowed to settle. For this demonstration, clear plastic,12-oz bottles work well. Fill each bottle about 2/3 full of soil. Place potting soil, local soil, and sand in separate bottles. Add water to near the top of each bottle. Place caps on the bottles, shake the contents well, and place the bottles in a location where they will not be disturbed. Prepare at least one day before making observations.

Group 1: Dry soil investigation. Make available potting soil and local soil, enough to be contained in the center circle of Master 2.1, Dry Soil Investigation (about 1 tsp for each group of 4 students). Also have hand lenses available.

Group 2: Soil and air space. Make available three clear test tubes that can hold 50 mL. If these are not available, you can use graduated cylinders. Make available at least 1 oz (30 mL) each of potting soil, local soil, and sand. Also have available a ruler and a container that holds at least 120 mL of water.